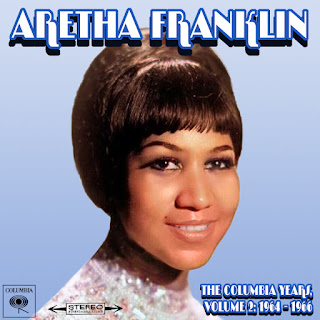 For most listeners, Franklin's career began in the year 1967. She signed to Atlantic Records, and she was immediately rewarded with some huge hits and critical acclaim, including the all-time classic song "Respect." But actually, her recording career began years earlier. She recorded for Columbia Records from 1960 to 1966. Unfortunately, they didn't know what to do with her. They knew she was a great talent, but they tried to push production and songs on her that didn't really fit her talents. They basically wanted her to be a mainstream Barbra Streisand type. Whereas Atlantic Records freed her to fully pursue soul music.

To this day, Franklin's pre-1967 material is mostly forgotten, even though Columbia Records has repackaged that material over and over in all sorts of different configurations. I didn't find any of their compilations satisfying, so I made one myself, which is here.

When I first posted this album in 2018, I listened to her Columbia material and picked out about 48 minutes of the songs I liked best. Then, in August 2021, a new Aretha Franklin box set called "Aretha" was released that covered her entire career. It included a few songs from her Columbia time period that I'd missed and that I had to admit were pretty good. That made me think that maybe I'd missed some others, so I went back to listened to her early stuff again. I did find more songs that I liked, enough to create two albums, which together add up to an hour and half of music.

As mentioned above, Columbia didn't give her the right material, though in the company's defense, apparently this was the musical direction she wanted to pursue at the time as well. That said, there are many songs that could easily fit on her late 1960s albums in terms of style and production. I tended to select those, while avoiding the many ballads with too much orchestration.


This album is 46 minutes long. Please don't forget to check out Volume 2. Here's the link for that:

After splitting this album in two, I decided to make new album covers for both volumes. It seems there are few or no good color photos of Franklin from 1960 to 1963. However, I found a nice black and white promo photo that apparently dates to 1961. I colorized it.