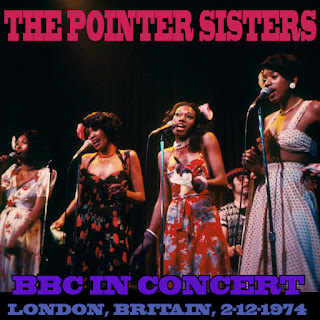 Here's yet another version of the BBC "In Concert" TV shows from the early 1970s. On the downside, that means it's a fairly short concert. But on the upside, like most of these other than some of the big names, it's never been converted to an audio bootleg until now.

Most people who think of the Pointer Sisters probably think of them as the pop act they were in the early 1980s, scoring with big hits like "I'm So Excited," "Automatic," "Slow Hand," and "He's So Shy." But this group was significantly different when this was recorded in 1974. For one thing, there were four Pointer Sisters, not three as there would be later, and yes, they were sisters. But also, musically, they had a mostly retro sound, with a look like a girl group from the 1930s or 1940s. However, while they did some old timey jazz and bebop, they also did funk, and country, and more. At this time, they'd only had one album one, with a second about to be released, but they'd already had two R&B hits with "Yes, We Can Can" and "Wang Dang Doodle."

Here's their Wikipedia if you want to know more:

Despite the fact that there are only five songs here, you can see their stylistic variety, for instance going from country with "Fairytale" straight to some great funk with "Yes, We Can Can."

This album is only 28 minutes long.

I could have used a screenshot from the YouTube video of this concert, but it would have been fairly low resolution, especially to have all four sisters in the frame. Instead, I used a photo that was taken in London in 1974, but apparently a different show (due to different outfits).