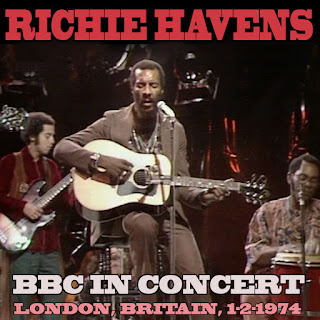 The excellent 1970s BBC TV show "In Concert" is featured yet again. This time, American folk singer Richie Havens was featured. But this was an unusual show in that nearly all such shows were only about half an hour long, but this one is an hour long. It turns out the first half of this show appeared on TV in January 1974, and the second half was shown in July 1974. (Probably, it was recorded in late 1973, but I don't know the exact date, so I'm using the date of the first broadcast.)

As I post this in June 2022, both episodes can be found on YouTube. The band members are wearing the same outfits and playing the same equipment on the same stage, confirming it was two parts of one concert.

Havens performed with three others, but the sound remained acoustic. For instance, the drummer played bongos instead of a full drum kit. With the concert being double the usual length for this show, he was able to play all the songs he was best known for, including his big hit, a cover of "Here Comes the Sun" by the Beatles, and "Freedom," which was a famous highlight of the Woodstock festival in 1969.

For whatever reason, there's almost no talking between songs. I guess he wanted to make the most of his limited time.

This album is 59 minutes long.

The cover photo is a screenshot I took from the YouTube video of this exact concert. The opening credits were included in the video, so I was able to use the same colors as those credits. However, I added the bottom line of text with additional information.