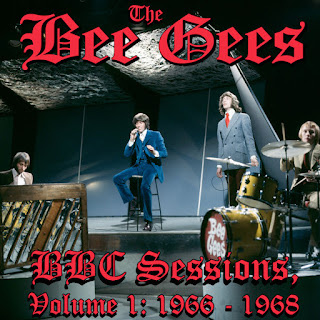 Next up in my BBC project is the Bee Gees. Everyone knows they were one of the leading lights of disco, with songs like "Stayin' Alive," "Night Fever," and "Jive Talkin'" dominating pop radio for a few years. But fewer people know the very different sound of the Bee Gees in the late 1960s and early 1970s. That's the kind of group on display in this series, because the Bee Gees only did studio sessions for the BBC from 1967 to 1973. This makes enough material for three albums, but it all predates their disco years.

The Bee Gees are one of the best selling musical acts of all time, selling somewhere between 120 and 200 million records. Personally, I recognize they created many great songs, while I sometimes have issue with them (such as the overuse of Robin Gibb's vibrato on ballads and the overuse of Barry Gibb's falsetto on their disco material). I don't think their BBC recordings are all that great, because they generally stuck to doing their hits, almost never doing unreleased covers or other rarities, and their performances tended to sound very similar to their record versions.

However, all these versions are different from the record ones, and they did do them live in the BBC studios (often with a BBC orchestra helping out), so it's further proof of how talented they were. Also, there seem to be no concert recordings from this time period, aside from one 1968 bootleg recorded at a concert in Switzerland with only decent sound quality. So if you want to hear what they sounded like live early on, this is just about as close as you can get. Actually, these BBC volumes make for a pretty good triple album "best of" for their early years.

Somewhat surprisingly, none of the group's BBC recordings have been officially released, as far as I know. All of them have excellent sound quality, since they all are sourced from BBC transcription discs that survived in top notch condition. I have added a few songs from other TV or radio appearances, usually in the rare cases in which big hits weren't done for the BBC.

The first two songs are examples of such additions. The Bee Gees got started in Australia, and they were sometimes on TV or radio in that country going way back to when they were a child act. I skipped most of that as being of interest only to die-hard fans. But I did include two songs done for Australian TV in late 1966, right before they left Australia to try to make it big in Britain (which, of course, they did). One song is "Spicks and Specks," their biggest hit while still in Australia. The other is a cover of the Rolling Stones hit "Out of Time." As far as I can tell, they never put a version of that song on record.

Everything else here comes from proper BBC studio sessions. They didn't get hit too bad with the problem of BBC DJs talking over the music. That only occurred for five of the songs here. As usual, I used the X-Minus audio editing program to remove the talking while keeping the underlying music.

The cover photo was taken at the Top of the Pops BBC TV show in 1968. For the text, I used the same font and color as how their name was printed on one of their early albums.