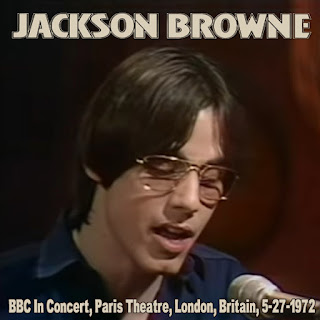 Here's yet another concert that was recorded for the BBC TV show "In Concert." This was a great show that featured a lot of up and coming singer songwriters. So it's not that surprising that they got Jackson Browne, even though he's American, not British.

Browne's career began slowly. His song "These Days" was a minor hit for Nico in 1967, when he was only 16 years old. But he didn't release his first solo album, simply titled "Jackson Browne," until the start of 1972. So this concert took place a few months after that. I don't know if the exact date of May 27, 1972 is correct. But he did mention in banter between songs that the Eagles version of song "Take It Easy," which he co-wrote, had recently been released as a single, and that single was released at the start of May, so it least it was the same month as that date.

This concert featured just Browne solo. Most of the songs are from his first album. But "Take It Easy" and "Redneck Friend" would appear on his second album in 1973. And "Peaceful Easy Feeling" and "Jesus in 3-4 Time" are covers that he would never included on any of his albums. "Peaceful Easy Feeling" is the big hit by the Eagles.

The one bummer about these "In Concert" TV shows is they're usually pretty short. This one is only 31 minutes long.

The cover photo is a screenshot that I took from a YouTube video of this exact concert. The video didn't include the opening credits. So since I didn't get to see the text color and such, I made my own font and color choices.