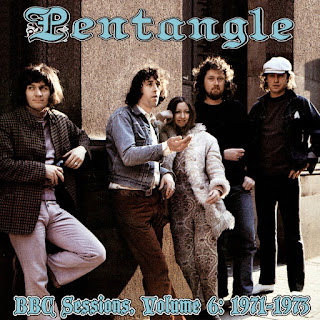 With this album, the sixth in the series, I reach the end of Pentangle at the BBC.

Pentangle broke up at the end of 1972, though they honored a few commitments into early 1973. (They did get together for some reunions later, but this series only deals with their music from the 1960s and early 1970s.) This album catches them right before their break-up, with all but two of the songs from 1972 - the first one is from 1971, and the last one is from 1973.

All the performances on this volume have been officially released, so everything sounds very good. One comes from "The Lost Broadcasts," five come from "On Air," and three come from the box set "The Time Has Come." However, not all of the songs are actually BBC recordings. "Rain and Snow" and "Willy O' Winsbury" were recorded for a British TV show, and "Reflection" was recorded for a Belgian TV show.

I don't know anything about the cover photo except that it's said to have been taken "circa 1973."