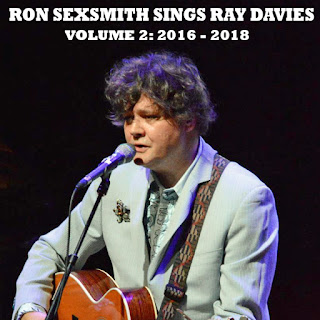 A couple of weeks ago, I posted an album of Ron Sexsmith performing an album of Kinks cover songs. They haven't been officially released, but they have been posted at his YouTube page, along with lots of other cover versions. This is a second volume of exactly the same.

There's not much to say that I didn't say with that earlier post. If you liked that, you should definitely like this. Personally, I prefer this volume, because Sexsmith digs deeper with even more versions of unexpected Kinks songs that go beyond their hits. For instance, where else will you find acoustic versions songs like "Underneath the Neon Sign" or "Killer's Eyes?" Even a lot of big Kinks fans aren't that familiar with such songs. One gets to enjoy all of these songs in a new way by hearing them in the stripped-down acoustic format.

Sexsmith is continuing to post lots of covers on his YouTube page. When I find enough Kinks covers, I'll post a third album. But judging by his previous pace, it'll take many months, if not another year or two before I have enough.

As I mentioned with the first album in this series, I could have used screenshots from Sexsmith's YouTube videos, but they don't show him at his best. So instead, the photo is of him in concert from around 2017.
Posted by Paul at 8:26 PM