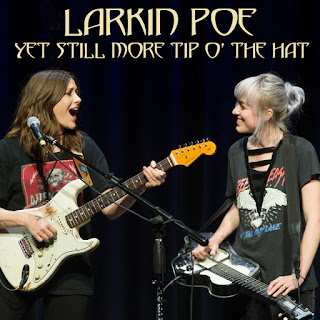 I'm very psyched to be able to post this album today, for three reasons. One, Larkin Poe are great, and I'm always keen to turn more people on to their music.

Two, I've been slowly collecting their acoustic cover versions that they post on YouTube, waiting for enough to fill another album in the "Tip O' the Hat" series. This is the fourth album, and each one has been about 45 minutes. A couple of months ago, I was ready to go, except I was one song short. Finally, the posted one more a few days ago, and it's an ideal album closer, a mellow instrumental. So I'm glad I waited.

As for the musical content of this album, it's the same great stuff as the others in this series. All-acoustic covers of classic songs, played only the way Larkin Poe can play them. They're mostly famous rock hits, but there's a wide variety, with the occasional obscure blues cover thrown in.

My only disappointment is that I want to post another album in this series, which I want to call "Yet Even Still More Tip O' the Hat" (I'm having fun with the increasingly ridiculous long album titles.) But I'll have to start back at zero and probably wait a year or longer for enough new songs to be posted on YouTube. But until then, you have this album, plus the previous three in the series (and the very similar "Vintage Covers" album), to enjoy.