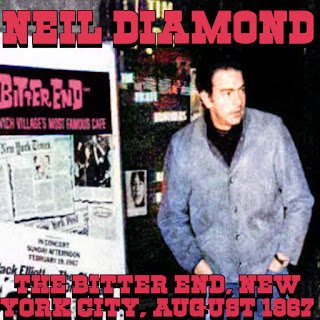 I have to confess that I'm not much of a Neil Diamond fan. I think he's written a number of great songs, but I pretty much only have a double album greatest hits from him in my music collection. So I never expected that I would be posting an album of his on this blog. But today, I stumbled across something from him that's so rare and interesting that I'm pretty psyched to have it here.

Neil Diamond (that's the name he was born with, by the way) had his first successful single with "Solitary Man" in 1966. He followed that with a handful of additional hit singles in 1966 and 1967. But his musical style was square and out of fashion for the time, a throwback to the Brill Building sound that he'd been a part of. So music critics and audiences didn't quite know what to make of him, yet many of his songs were so good and catchy that he couldn't be ignored.

Into that scenario comes this concert recording. As far as I can tell, there are virtually no live recordings of him from before 1970, either official or bootleg. Yet I stumbled across this fascinating bootleg of him playing the Bitter End in New York City in August 1967, at a very early stage of his career. The sound quality isn't great. It's rougher than the vast majority of live recordings I post here. But I'm posting this anyway because I think it's a fascinating recording, and it sounds decent enough for me to enjoy listening to it.

This concert is interesting to me due to the song selection, as well as its historical rarity of being the only known concert recording from his early years. The recording is less than 30 minutes long, but almost every song he played is now considered a classic. He started with a cover of the Ike and Tina Turner classic "River Deep, Mountain High," which is interesting in and of itself. He didn't release a version of it on record until 1993. He also played "I'm a Believer" and "A Little Bit Me, a Little Bit You." Both of those were big hits for the Monkees. Diamond put out his own version of "I'm a Believer" on album after the Monkees had their hit with it, but he never put out his own version of "A Little Bit Me, a Little Bit You." So it's great to have that here, even though it's part of a medley and only about one minute long.

Aside from that, he played most of his best, classic songs, including "Solitary Man," "Cherry, Cherry," and "Kentucky Woman." He also did "The Boat that I Row," a song he wrote that was a big hit for Lulu in Britain. Because the recording is so short, I looked around to see what else I could add that would fit. All I could find was a performance of "Girl, You\ll Be a Woman Soon," which he played on TV two months later.

There were some problems with the recording. One is that there was virtually no space between the songs. Whatever between song banter existed hasn't been included, which is a shame. Also, typically, there was just a couple seconds of applause at the end of each song, and then there was a quick and drastic cut to the start of the next song, often cutting off a bit of the song's beginning. I tried to fix this as well as I could by patching in more audience applause from elsewhere in the recording, then fading that out, so the songs don't slam into each other. I also tried to repair the song beginnings that got cut off, by using intro riffs that got repeated later in the song. This worked in a couple of cases, but in others, there wasn't anything i could do.

Anyway, despite the somewhat rough sound quality, the short length, and the lack of talking between songs, I still think this is a very interesting recording. Personally, this is the kind of Neil Diamond I like best, before he turned into a slick and professional superstar with glammy production and presentation. It's kind of like the early Elvis (Presley) at Sun Records vs. late Elvis in Las Vegas comparison. Here, we have a young and hungry Neil Diamond back when he was still playing a tiny club. I wish we could hear the entire concert, with top notch sound quality.

By the way, around the month this concert happened, Diamond got in a big dispute with his producer Bert Berns. Berns was an excellent songwriter, so much so that I've included him in my "Covered" series of albums. But Berns also was a ruthless businessman. (Van Morrison would certainly attest to that, since he had big problems with Berns as well.) A couple of weeks after Diamond and Berns had a falling out in a recording studio, Diamond was playing a show at this very venue when a bomb went off. Nobody got hurt, but the club had to be cleared out, and there was damage. The police never found out who did it, but Diamond was convinced that Berns was behind it. Berns died later in 1967 of natural causes. Even so, Diamond was so spooked that he alerted the FBI, and carried a gun with him wherever he went for about another year, worried that Berns' Mob-connected associates were out to get him.

Now, I'm not sure if that bomb went off at this show or another one at the same venue. It's known that Diamond played the Bitter End at least twice in August, once on August 1oth and again on August 27th. So this recording could be from either show, or there could have been other shows there around that same time that weren't documented. But the odds are decent that that bomb went off at this very show, which makes it even more interesting, in my opinion!

The cover art photo might look a little odd at first, and it's somewhat blurry. But I chose this because it depicts Diamond standing in front of the Bitter End around the time this concert took place. I cropped it so you can see that the sign he's standing next to says "The Bitter End" on it. The picture was originally black and white, but over a year after I first posted it, I colorized it.