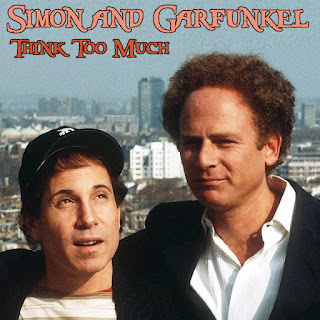 Just yesterday, I made my version of the 1983 Simon and Garfunkel reunion studio album that almost was. I'm kind of surprised I never tackled this before, because it's the exact sort of thing this blog is all about. I suppose I was dissuaded by the fact that PJ posted a version on his excellent blog "Albums I Wish Existed" a while back. But I had some different ideas on what to include or not include, so here's my version.

Here's the background story. After about 10 years apart, Paul Simon and Art Garfunkel reunited for a concert in New York City in 1981, which was released as the live album "The Concert in Central Park." In 1982 and 1983, they toured all over the world, and also planned to put out a studio album, which was slated to be called "Think Too Much." However, Simon had written all the songs for an intended solo album, and he didn't see much point in having Garfunkel's harmonies added on, except to presumably boost sales and publicity. After Garfunkel recorded harmonies for a bunch of the songs, Simon changed his mind, wiped those harmonies, and released the album purely as a solo work in late 1983, renamed as "Hearts and Bones." I think it's one of his best solo albums, but it didn't have an obvious hit single, and it sold way below expectations.

Unfortunately, none of the Simon and Garfunkel versions of these songs have ever been officially released, even though there has been a version of "Hearts and Bones" with a handful of bonus tracks. I suspect those versions will never be released, since Simon and Garfunkel have had a contentious relationship for decades, and Simon probably doesn't want versions with Garfunkel to overshadow his versions.

A couple of the Simon and Garfunkel studio versions have been bootlegged: "Allergies," "Song about the Moon," and "Train in the Distance." I've used those, although I'm only really impressed with "Song about the Moon." "Train in the Distance" doesn't sound that different. I suspect with "Allergies" that some clever bootlegger stuck part of an Art Garfunkel solo song at the start, and the rest is just the "Hearts and Bones" version. But even if that's the case, it's very well done, so I'm fine with keeping it.

Note that there supposedly also is a bootlegged studio version of "Cars Are Cars," but I've listened to it, and I'm guessing it's just the "Hearts and Bones" version with some bits from a live version patched in. Unfortunately, it was not done in a seamless manner, so I've avoided that one.

There's also the strange case of the song "Citizen of the Planet." Simon recorded a nice version of this song in 1983, but didn't release it at the time. Apparently, he felt the lyrics were too direct for this environmental message song, and he preferred a more subtle style. But in 2003, when Simon and Garfunkel put out a live album called "Old Friends: Live on Stage," Garfunkel added new harmony vocals to Simon's 1983 recording. It was included as the only studio song on a live album. So it's a bit odd in that the harmony vocals were recorded 20 years later, but you'd never know just by listening to it. I think it's a fine song, done well.

If that was all there was to work with, there wouldn't be enough material to make this a Simon and Garfunkel album. Luckily, a few more of the songs intended for the album were played in Simon and Garfunkel concerts in 1983. Also luckily, there's one 1983 bootleg that's an excellent soundboard, from a Vancouver concert. I was able to use versions of "Think Too Much," "The Late Great Johnny Ace," and "Cars Are Cars" from that. with the audience applause removed as much as possible. ("Allergies" and "Song about the Moon" were also played at some different 1983 concerts. Unfortunately, bootlegs with them on it sound much, much worse. Plus, the live version of "Allergies" I've heard has no Garfunkel vocals at all. And the bootleg studio version of "Song about the Moon" exists and is ideal for inclusion here.)

I need to explain more about "Think Too Much" and "The Late Great Johnny Ace," because I made edits to both of them. "Think Too Much" was just fine, except both Simon and Garfunkel badly flubbed the first verse. It was so bad that one of them apologized as the song kept going. So I edited out the first verse entirely, including that apology. (I tried to patch in the studio version, but there were too many differences and it sounded bad.)

I made a more radical edit with "The Late Great Johnny Ace." This is mostly a Simon solo song. But in concert, Garfunkel added harmony vocals to two parts. Using the audio editing programs Spleeter and X-Minus, I isolated the Simon and Garfunkel vocals from those two parts of the Vancouver live version, then patched them in to the studio version. What's interesting is the second part has some wordless harmonizing that is an entirely different way to end the song than in the studio version. So I fit that in, then edited the song so an instrumental section ending the studio version follows. I wouldn't have done this if I thought it didn't work, but I think it works well. I'd be curious what others think.

With those live versions added in, the amount of Garfunkel on this alternate album has gone up, but the album is still rather short on his vocals. On previous Simon and Garfunkel albums, he usually sang lead vocals on at least one song, but there's no such song or songs here. So, to boost his profile a bit more, I've added in two live covers that weren't actually intended for the "Think Too Much" album. I'm taking some creative license to make it more of a proper collaboration.

First, I added in a cover of the Chuck Berry song "Maybelle" taken from a soundboard bootleg recorded in 1982 in Osaka, Japan. This was the second half of a medley with "Kodachrome," but I split it from the medley. Then I added in a cover of "One Summer Night," from the 1983 Vancouver concert. This song was first done in 1958 by the Danleers. You can't really hear any crowd noise on "Maybelle" because the band is so lively and the bootleg is good. But you can hear the crowd cheering sometimes during "One Summer Night." I tried to reduce that using Spleeter and X-Minus, but I could only do so much without making things sound worse. Note that the 1970 Simon and Garfunkel studio album "Bridge Over Trouble Water" has a lot of crowd noise on the cover song "Bye Bye Love," so consider this a similar thing.

After everything described above, nine of the 12 songs have at least some Garfunkel vocals on them, though still not as much as I'd like for a reunion album like this. I couldn't see anything to do to the remaining three songs, "Hearts and Bones," "Rene and Georgette Magritte with their Dog After the War," and "When Numbers Get Serious," so I just used the "Hearts and Bones" versions of those. Note though that "Hearts and Bones" has two versions of "Think Too Much," labeled "A" and "B." I've only used one, which closely follows the arrangements of "Think Too Much (A)." I figure it's a stronger album, with more Garfunkel involvement, to have the two covers and "Citizen of the Planet" mentioned above instead.

For the cover art, I used a photo from 1982. I have no idea what city is behind them.