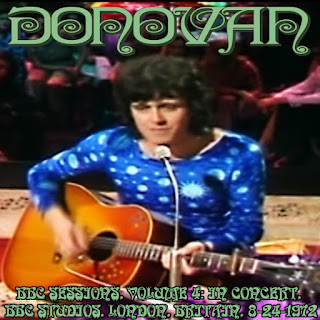 Here's Volume 4 of Donovan at the BBC. This one is different from the others. Those were collections of various TV and radio sessions. He didn't seem to do any other such sessions for all of 1971 or most of 1972. But then in August 1972, he played a single BBC TV, "In Concert," that is presented here. It's 44 minutes long, and just features Donovan on acoustic guitar.

The songs played are from all points of his career so far. He played some of his old hits, like "Catch the Wind," "Colours," and "Mellow Yellow." But he also did a number of new songs, including two from his latest album "Cosmic Wheels," the songs "Cosmic Wheels" and "Maria Magenta." A few songs were still unreleased at the time: "Sailing Homeward," "The Ordinary Family," "People Call Me the Pied Piper," "Lovely Princess," and "A Well-Known Has-Been." There's also a fair amount of talking between songs, and audience participation on the song "Happiness Runs."

As you'd expect from the BBC, the sound quality is excellent, even though this show remains officially unreleased.

The photo I used for the cover is a bit low-res. But I used it because it's a screenshot taken from this exact concert.