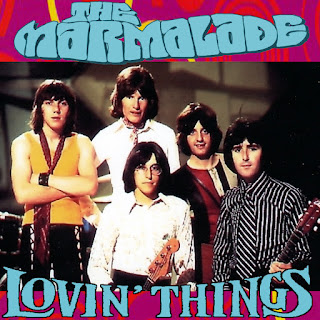 In my opinion, the band Marmalade has been underrated. So I'm posting a few albums of what I consider their best stuff, from both studio tracks and unique BBC tracks. Here's the next one.

In 1968, Marmalade had a huge hit with a cover of the Beatles song "Ob-La-Di, Ob-La-Da" off the "White Album." It didn't chart at all in the US, but it went to number one in Britain. This was more a matter of luck than skill, since that song was a natural big hit and the Beatles didn't release it as a single, so it was just a matter of which other band acted quickly to have the hit instead. (They got an unreleased acetate of the song and immediately rushed to the studio literally in the middle of the night to record and release it.)

Unfortunately, the hit helped stereotype them as a pop band that did singles of cover songs. In fact, they were quite talented with their own material. But their record company was only interested in hit singles, and reinforced the stereotype by pushing them to cover other songs by reliable hit songwriters.

"Ob-La-Di, Ob-La-Da" was such a big hit that the band was finally allowed to record and release their first album in late 1968. However, that album, "There's a Lot of It About," was a hastily thrown in cash grab. It mostly consisted of A- and B-sides dating back to 1966, plus some covers of big hits that they band knew well from their concerts. Most the cover songs were already overdone by others, or done better by others, such as "A Piece of My Heart," which of course was definitely done by Janis Joplin already. Other covers woefully out of date, for instance, "Mr. Tambourine Man," a Byrds hit back in 1965. So while I included some covers that also were overdone or out of date, like "Hey Joe" and "Summer in the City," I skipped those two.

A better 1968 album could have been made, and this is my attempt at that. Of course I included their three hit singles ("Ob-La-Di, Ob-La-Da," "Lovin' Things," and "Wait for Me Mary-Anne") and their B-sides. Another five songs are the better ones from "There's a Lot of It About." Finally, I included three songs only done for BBC sessions. I think "Mr. Businessman" is an original they only did for the BBC.

The photo for the cover was taken some time in 1968. I also found an album or single cover called "Livin' Things," and used the top and bottom text from that, as well as the background pattern.

Email ThisBlogThis!Share to TwitterShare to FacebookShare to Pinterest
Labels: 1968, Marmalade