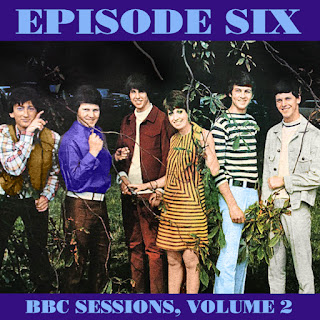 I just posted Volume 1 of Episode Six at the BBC. While I'm at it, here's Volume 2.

Hopefully, by posting these two together, I don't need to explain Episode Six and their music again. If you don't know, just read what I wrote with Volume 1.

As with that volume, the band mostly did cover songs for the BBC. I could be wrong, but I think the only originals here are: "Monster in Paradise," "Mozart Versus the Rest," "I Am the Boss," and "I Am a Cloud."

All the songs here come from the archival compilation "Cornflakes and Crazyfoam." There are a handful of songs near the end that the liner notes claim come from an unknown source, and say they could have been demos or from a radio show. However, there's another archival compilation that has those exact same versions of those songs with BBC DJ talk before and after them, clearly identifying their source.

A bunch of the songs (including those supposedly unidentified ones) come from a long BBC session in early 1969 of half an hour or more. The session was supposed to feature Pink Floyd, but they canceled at the last minute. The BBC called up Episode Six, and they raced to the studio just in time to fill in. So while that was nice, I must say I wish we could have had more of Pink Floyd at the BBC.

Exactly the same as on Volume 1, only two out of the 19 songs here had the problem of BBC DJs talking over the music. As usual, I used the audio editing program X-Minus to fix those (which are marked with "[Edit]" in their titles).

This album is 58 minutes long. It's the last of anything worthwhile I have to post from this underrated band. Now I'll be free to start posting Deep Purple BBC sessions albums, since two of the band's members moved to that band in 1969.

As I mentioned in the last post for this band, the best color photos I could find for the cover art all seem to come from the exact same photo shoot, done in 1965 or 1966. One can tell because they're wearing the exact same clothes and have the same haircuts. But at least the photos are significantly different from each other. For instance, this one was taken at night, and the other two I used were taken during the day. For this one, many of the colors were off, but I used Photoshop to align them with the colors from the other photo session photos.