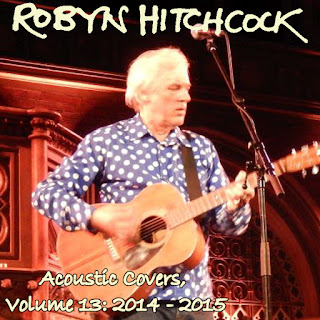 Yesterday, I posted a Robyn Hitchcock album ("Mossy Liquor - Acoustic Versions") that I thought I'd posted a long time ago, but accidentally missed. I found that because I was fixing the mp3 tags of all his previously posted albums while I was getting ready to post this album. Since it's ready, I'll post it too.

Over the years, Hitchcock has played a remarkable number of cover songs in concert. This is the 13th album in this series, and there's a bunch more to go after this one! As usual, they're all done solo acoustic style, and also as usual, every single performance is officially unreleased. Sometimes, I find songs from radio station appearances, but for this album all the songs come from concert bootlegs. The sound quality varies from song to song, but they're all worthy of inclusion, in my opinion.

Hitchcock has been consistent about who his favorite influences are: Bob Dylan, the Beatles, Syd Barrett, the Velvet Underground, Roxy Music, and so on. All the usual suspects are here, with the exception of any Beatles-related cover.

I've lost track of where the cover photo comes from, but I assume it's from 2014 or 2015. According to a commenter, it was taken at the Union Chapel in London.