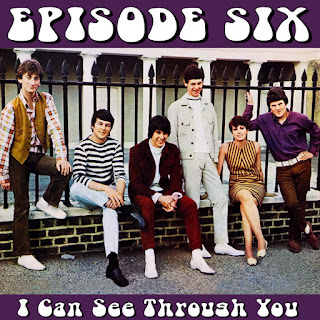 After reading the headline of this post, you're probably wondering, "Who or what the heck is Episode Six?" If you're already familiar with this band, then I'm impressed with the depth of your musical knowledge. Although they were a British band from 1965 to 1969, they never put out an album, and they never had even a minor hit single. These days, they're remembered for one thing: two future key members of Deep Purple were originally members of this band.

More specifically, lead vocalist Ian Gillan and bassist Roger Glover would leave Episode Six and join Deep Purple in mid-1969. So that made Gillan the lead vocalist of the most critically and commercially successful "Mark II" version of Deep Purple in the early 1970s. Gillan and Glover were also a songwriting team, and had key roles in writing most of Deep Purple's most famous songs, from "Smoke on the Water" on down.

Gillan was the main lead vocalist for the entire duration of Episode Six represented here, and he and Glover wrote some of their best songs. So that makes this band of interest for serious Deep Purple fans. But Gillan wasn't the only lead vocalist. This band was unusual for that time in that they had both a male lead vocalist and a female one. The female, Sheila Carter, sang a lot fewer songs than Gillan, but she did sing a fair share.

Here's the Wikipedia page if you want to know more about the band:

All Deep Purple connections aside, Episode Six was a talented band that deserved more success than they had. One hint of this is that the BBC loved them. Despite having zero hits, and not even having that many singles released, they performed sessions for the BBC over and over again. In fact, after posting this album, I plan on posting two albums of the band's BBC sessions.

In a way, the band had a problem of being TOO talented, because they could capably play just about any song in any style, and they did, which meant they didn't have an easily defined musical identity. Note that, in general, the band was far more poppy than Deep Purple. They had just decided to move into more of a hard rock style when Gillan and Glover were poached by Deep Purple, and the band's fortunes effectively came to an end (though they lingered on longer and slowly fizzled out).

Although the band never put out an album while they were together, there has been a handful of archival compilations in subsequent decades. I've taken what I consider the best songs from all of those (not counting the copious BBC material) to make this album. Thirteen out of the 20 songs here are A- and B-sides. The others are studio demos and outtakes that didn't get released at the time.

I think this is a solid collection all the way through, but the highlights in my opinion are the songs "Love, Hate, Revenge," "I Can See through You," and "Morning Dew." The first two are originals, like most of the other songs here. "Love, Hate, Revenge" was included on Rhino Record's classic "Nuggets" box set. In a better universe, it would have been a big hit. Oddly, "Morning Dew," a cover of the folk classic, was a number one song in Lebanon, but nowhere else! That suggests to me their lack of commercial success probably had more to do with record company promotion and/or distribution problems than the actual music.

This album is 52 minutes long.

There are very few good color photos of this band. I don't know where or when this one is from exactly. I'm glad to have any decent photo at all. If anyone can identify which band member is which, please let me know, and I'll add that info in.