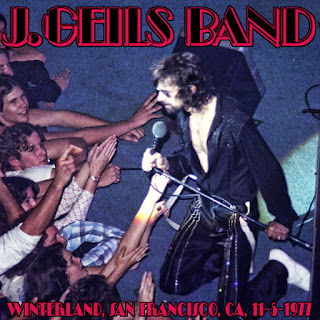 There are many artists I haven't posted any music from yet. Here's one, the J. Geils Band. I post a lot of acoustic music here, but sometimes it's good to just rock in a party mode, and they're good for that.

The J. Geils Band is best known for their big 1981 hits "Centerfold" and "Freeze-Frame." But they had been around since the late 1960s. Although they released many studio albums and had some success with them, they were widely considered to be better on a live stage than in a recording studio. They only released two albums from their 1970s prime, one in 1972 and the other in 1976. The 1976 one, "Blow Your Face Out," was actually recorded in 1975.

I like this bootleg concert better. For one thing, it took place two years later, so they had more material to draw from. This came after their studio album "Monkey Island" was released, and they played four songs from that. For another thing, it's significantly longer. "Blow Your Face Out" is an hour and 15 minutes long. This concert is an hour and 51 minutes long. So, basically, it would be a triple album in vinyl record terms instead of a double album.

In terms of sound quality, this is a great one. It was professionally recorded and filmed for some reason (you can watch the video of it on YouTube), so it sounds just as good as their official live albums.

There are only a couple of problems. The first one is typical for these kinds of bootleg recordings: the talking between songs and the cheering after them was a bit quiet, so I boosted the volume of those parts.

Also, there are flaws with two songs. The first song, "Somebody," originally faded in. It was only for a few seconds, and I fixed it by patching in a later repeat of the opening chords. But that does mean there's nothing before the first song, such as an emcee introducing the band, or the crowd cheering when they band took the stage.

The other song with a flaw is "Serves You Right to Suffer." If you watch the video of this concert on YouTube, you'll see the start of the song is missing. It's impossible to know how much is missing, but in concerts the band usually extended this song to about nine minutes or so, and this version is only four and a half minutes long, so there's a significant loss. However, whoever posted this bootleg before me already came up with a fix, by having a lot of crowd noise to cover up a slow fade-in. I didn't do that at all, but it sounds okay by me, so I kept it that way.

I'm happy to say that the cover photo comes from this exact concert. That's a lucky break, but I especially like this one. It uses a rare overhead view of the lead singer Peter Wolf, with fans at the edge of the stage reaching out for him. It's very evocative of big 1970s rock and roll concerts, in my opinion.