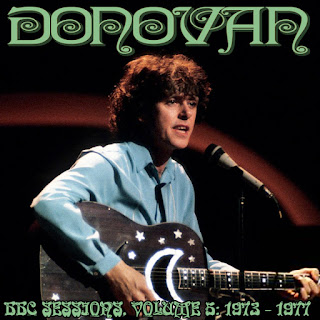 Here's the fifth and last of the albums I've made of Donovan at the BBC. However, I must say it's a real stretch to call this a BBC album, because only the first two songs were from BBC TV or radio shows. The rest are from various other TV and radio shows in the US, Germany, France, and Belgium.

Donovan's public and musical performance was closely tied with a 1960s flower power hippie image. He stumbled commercially in the early 1970s, having no more hit singles. However, in my opinion, he rallied creatively in the mid-1970s, writing a lot of solid songs. That time period is well represented here. A couple of the songs are versions of his 1960s hits ("Colours" and "Sunshine Superman"), and there's one cover, "Travelling Light." But pretty much all the rest are his better 1970s songs.

All of the performances here are officially unreleased. But because they come from TV and radio shows, the sound quality is generally high. There's a mixture of solo acoustic and full band performances. Most of the songs were done in front of audiences, but I generally edited out the cheering as much as possible to allow for a consistent studio sound.

As the 1970s progressed, Donovan found himself increasingly out of step with cultural and musical trends. I think it affected his creatively, and his career more or less petered out by the end of the 1970s. He would have later comebacks, but his TV and radio appearances also petered out for several years, so this is a good point to end this series.

This album is 37 minutes long.

The cover photo is said to be from a TV appearance "circa 1973," but I don't know any details beyond that.