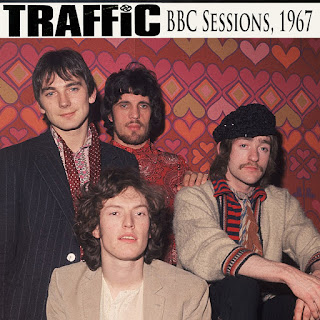 I'm proud of this release. Even if you have some from on Traffic at the BBC already, you need this version. Bootlegs of these performances have existed for many years, but I'm confident that the music has never sounded as good as it does here.

On previous bootlegs, some of the songs had good sound quality while others were poor. But apparently, at some point in the last year or so, the performances were replayed on the BBC again, resulting in a new bootleg version of the songs at a much higher sound quality. Furthermore, a few songs were included that hadn't been bootlegged before.

But there was one very big fly in the ointment: these new versions included BBC DJs sometimes talking over the beginnings and ends of the songs. Whereas the previously bootlegged version at poorer sound quality typically didn't have the BBC talkovers.

Thus, I made an effort to get rid of the talkovers. However, I didn't actually end up using the previously bootlegged versions that much. Instead, I often used the studio recordings of the songs. This is because many of the BBC performances either used some of the backing tracks from the studio versions, or they were live versions that were remarkably similar to the studio ones. Either way, I was able to combine them well. In some other cases, I did use the previously bootlegged versions. Typically, I had to do this for the beginnings of the songs, right up until when the vocals began. I've included "Edit" in the titles of songs when I had to make particularly significant edits like that.

Thanks to all these edits, for the first time anywhere, one can hear all the BBC performances with sound quality exactly as good as the original broadcasts, and without any of the annoying DJ talkovers. This really should be an officially released album, but I've heard some record company disputes make the release of previously unreleased music from the Dave Mason years very difficult. Even if they do eventually release this, they might not remove the DJ talkovers.

The last song here, "Utterly Simple," is a bonus track of sorts, in that it isn't actually a BBC performance. It's actually exactly the same as the studio version, but it's remixed to make the spoken "phone call" in the middle of the song louder. Previously, I'd never paid much attention to that spoken part because it was largely drowned out by the music, but with this version, one can hear it as clear as day.

Traffic only performed in the studio for the BBC in 1967 and 1968. (Later, some of their live performances were played by the BBC.) I've split their performances into two albums. The 1968 album will follow.

As I've mentioned elsewhere, color photos of Traffic in concert in 1967 or 1968 are very hard to find. So I've gone with band publicity photos instead. This one is from 1967. But everyone in the band was looking slightly to the side, so I made some slight edits to their eyes to make them look into the camera.
Posted by Paul at 4:17 PM