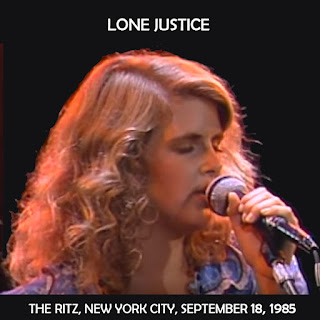 I've posted some material from Maria McKee's solo career, and I plan on posting a lot more. But so far, I've overlooked her earlier band, Lone Justice. With this post, I'm starting to rectify that.

For a time in the mid-1980s, Lone Justice was considered the hot "it" band. Many people who saw them in concert assumed they would go on to be hugely successful. That never happened, and it's a mystery why. But one can listen to an album like this one and understand why there was all the hype.

This is a really excellent concert. I've listened to a bunch of Lone Justice concerts, and this one is my favorite. It's a bootleg, but the sound is just as good as an official live album from the era. The song selection is excellent too.

I've added "Sweet Jane" as a bonus track of sorts. It's from another 1985 show, but one can easily imagine it was an encore to this one, since the band frequently played it as their encore.

I'm happy to say the photo for the cover art here is a screenshot taken from the very concert the music comes from. That's because a quality video of the show exists on YouTube, and I took it from that.
Posted by Paul at 7:32 PM