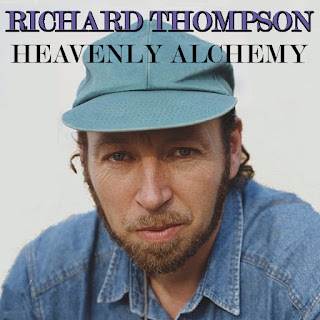 A while back, I posted an album that consisted entirely of Richard Thompson's acoustic stray tracks from 1990. This is sequel to that. In this era, Thompson played a great variety of acoustic songs.

The album starts with a bang: "From Galway to Graceland" never appeared on any album, and first showed up on a box set. But it turned out to be one of Thompson's most beloved original songs.

The vast majority of the rest of the songs are cover versions. There are a couple of exceptions, such as "Days of Our Lives," which was done in a very different style on a 1990 French, Frith, Kaiser & Thompson album. "Nobody's Wedding" and "Waltzing's for Dreamers" also are originals, from albums much earlier in Thompson's career. I've included them because it's rare to have acoustic versions of them.

"Heavenly Alchemy" is an unusual case. It's not really a song. Instead, Thompson recites Shakespearean poetry. I considered it interesting enough to include.

About half of the songs are officially unreleased. But all or nearly all of those come from excellent soundboard recordings, so the sound quality is solid for the whole album.  All but one of the songs were performed live, but I removed the crowd noise whenever possible.