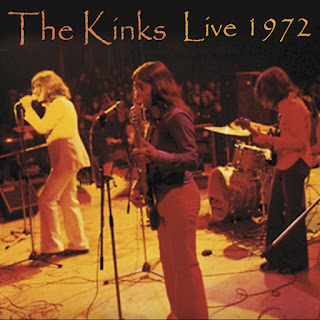 There are frustratingly few live recordings of the Kinks before the late 1970s with truly excellent sound quality. One year that is an exception is 1972.

That year, the Kinks put out the double album "Everybody's in Show-Biz," with one album of new studio songs and the other album of live songs recorded at Carnegie Hall in New York City in March 1972. Many years later, a deluxe version of the album was released with even more songs from Carnegie Hall.

This album gathers up all those songs and puts them in the order they were originally played, as much as possible. Most of the songs were from March 3, so the first ten songs here are from that. Some of deluxe version bonus tracks were taken from a March 2 Carnegie Hall show, so the next four songs are from that.

But on top of that, I've found two other concerts from 1972 in excellent sound, so I've added in all the songs from those that aren't repeats from the other concerts here. There are just two songs from a concert in Charlottesville, Virginia in November 1972, but one of them is a medley of four different songs. This album ends with six more songs from a concert at the Felt Forum in New York City, also in November 1972. The Charlottesville and Felt Forum songs are from bootleg, but they are soundboard recordings that sound just as good as the officially released songs.

Note that I've deliberately NOT included some songs, just because they annoy me! Around this time in the early 1970s, Ray Davies had a habit of singing snippets of really cheesy and annoying old songs like "Baby Face" and "The Banana Boat Song." I'm not sure what the point was, but I don't see anything musically redeeming in these whatsoever. So I didn't include those two, plus "Mr. Wonderful." I think this is a case where "less is more," and the album is stronger by not having these songs.

I also didn't include "You're Looking Fine," even though it was on the original "Everybody's in Show-Biz" album, because I've included "You're Looking Fine" as part of a medley from the Charlottesville concert that is superior, in my opinion. I don't like having multiple versions of the same song on one album, as a general rule.

By the way, one curious aspect of the Kinks in concert in 1972 is that they released the "Everybody's in Show-Biz" album in August 1972, and yet they hardly ever played the songs from the studio portion of that album in concert, other than "Here Comes Yet Another Day" and "Celluloid Heroes." Even "Supersonic Rocket Ship," which was a minor hit, apparently was never played in concert at the time. I would have included more such songs if at all possible.

For the album cover, I found a photo of the band in concert at the Hollywood Palladium on March 9, 1972. It doesn't show every member of the band, and it's hard to see anyone's face clearly, but I felt it captures the vibe of a Kinks concert better than the other photos I could have used.
Posted by Paul at 5:30 PM