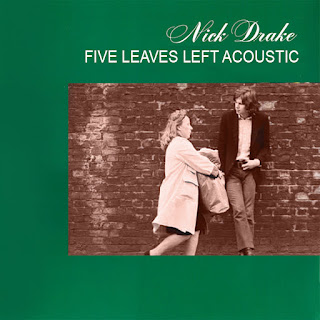 If you're a fan of Nick Drake's music, what do you think of the orchestrations on his first two albums, "Five Leaves Left" and "Bryter Layter?" Personally, sometimes I like them, but sometimes I feel they're a bit much and I wish I could hear those albums without them. I have attempted to do just that: make versions of those albums with all the strings stripped away.

Here's my version "Five Leaves Left." I'll post my version of "Bryter Layter" another time. (There's no need for an acoustic version of "Pink Moon," since it's all-acoustic to begin with.)

I wish it were as simple as finding multitrack versions of these albums and then editing each song to remove the track or tracks with the orchestration. Unfortunately, it's not that easy. There's only been one Drake album released with more than the two stereo tracks. That's a compilation known as "A Treasury," which has a few songs from each of his studio albums. Unfortunately, I haven't been able to get editable multitracks from that. If you know of such things, please let me know.

Luckily, someone else did make stripped down mixes of a handful of Drake's songs using the multitracks from that album, and posted them on YouTube. The version of "Fruit Tree" here is one of those. It's exactly the same as the album version, just minus the strings.

The rest of the songs here come from other sources though. They're all alternate versions Drake played with just his voice and guitar (or piano) that were released on "Time of No Reply," "Fruit Tree," or "John Peel Session," plus two versions taken from bootlegs. These performances are sometimes a little different from the album versions, but generally he played and sang his songs very similarly each time. So this is as close as an orchestra-free "Five Leaves Left" as you're likely to get, unless the full multitracks are released for all his songs someday.

Frankly, some songs don't sound that different, because they were pretty close to being all acoustic anyway. But others were heavily produced, such as "'Cello Song," "Way to Blue," or "Man in the Shed," and these versions sound quite different. This version is a full four minutes shorter than the official album, since things like the bongo-based instrumental section at the end of "'Cello Song" aren't included.

I'd be curious to hear from people, if you prefer this version or the orchestral version, or if you like both. Regarding the cover, if you remember the artwork for the original album, the back cover prominently features a photo of Drake leaning against a wall while a man quickly walks past him. There were some outtakes from that photo session. I used one of the outtakes to replace the front photo. I otherwise kept the art the same, except I changed the title.

Also, here's another alternate I considered, that I colorized.