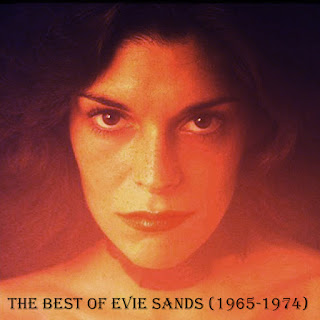 For the most part, I've been posting stray tracks collections from well known artists. However, there's another bunch of albums I could post, which are best of collections from lesser known artists. Some artists have been underappreciated, and often have never had a decent official best of album (if they even had one at all). If there's interest, I could post more albums of this type.

Here's a good example. As far as I know, there never have been any sort of best of representing Evie Sands whatsoever. And that's a real shame, because in a better world, Sands should have been a big star. Looking at the album cover here, it's plain to see that she was gorgeous, and she had a great voice, plus charisma. But making it big in the music business requires some amount of luck, and she never got a lucky break.

You can read about her career in Wikipedia here:

But the gist of it is that she recorded many songs that should have been hit singles for her, but weren't for one reason or another. Mostly, her record companies were too small or incompetent. For four different songs, she did the earliest version, but other artists had the hit with it. For instance, she was the very first to record and release "Angel of the Morning," but her record company was going out of business at the time. Later that same year, 1967, another little known singer, Marrliee Rush had a top ten hit single with it, and it has since gone on to be covered by dozens of artists and has been a hit over and over again.

On top of everything else, Sands was a talented guitarist and even evolved into a pretty good songwriter. Unfortunately, I'm not a fan of most of her 1970s work, because she fell a victim to the trends of the times, such as disco in the late 1970s. She retired from recording music after that for a long time.

However, she resumed her career in 1999 with the release of the album "Women in Prison." I have this album and I like it a lot. She's gone on to put out more good music since then, unfortunately still in obscurity. She continues to tour and record to this day.

I haven't included any of the music from her latter career, since that's a different kettle of fish, done in a somewhat different style. Her earlier material was done for a variety of different labels, so it's highly unlikely any company will ever gather all the rights together for a good best of album. But here's my version. It's 49 minutes long, and arranged in rough chronological order.

Sands is so obscure today that I had a hard time finding a decent color photo of her from her younger years. The cover art comes from her 1974 album "Estate of Mind." I cropped it and tweaked with the coloring to make it less reddish.
Posted by Paul at 6:35 PM