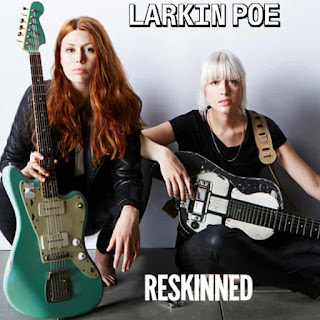 I love Larkin Poe, and you need to go buy all their albums right now. ;) So I'm happy to tell you they just released a new album a few days ago, called "Venom and Faith." I heard it and it's great, so go get it! ;)

That said, Larkin Poe frustrates me because they seem determined to release their music in a way that gets the last amount of attention, if they release it at all. For instance, they are champions of the EP format, having released six EPs of all new material in their relatively short career, compared to only four full albums.

Furthermore, one of those albums hardly counts as an album. In 2014, they released the "Kin" album, which is fantastic. If you buy just one album from them, I suggest that one, especially because it contains "Stubborn Love," which I think is one of the very best songs by anyone this decade. Then in 2016, they released "Reskinned." But it only had five songs of new music, a measely 17 minutes. The rest were repeats of songs from "Kin." That would have been okay if they redid those songs in some different way, but they were the exact same versions!

So, to celebrate the release of their new album and hopefully turn some new people on to this great musical duo, I've made my own version of "Reskinned." The first five songs are the exact same versions of the five new songs on the official version. But then I flesh the album out with five more songs, for a total of 41 minutes of music. Four of the five additional songs are originals that haven't been officially released anywhere, and the fifth, "New Pony," is a cover of an obscure Bob Dylan song that sounds just like an original. Why they repeated so many songs from "Kin" when they had these quality originals available at the time is beyond me!

Three of the additional songs come from a concert, but it was one that was played in a recording studio of sorts, so the sound quality sounds just as good as studio recordings, in my opinion. I was able to completely eliminate even a hint of audience noise. The other two were done live in the studio for radio shows, and sound just as good.

By the way, their new album is also only 32 minutes long. Larkin Poe, what's your deal with so many EPs and short albums?! And then all sorts of good original songs that go unreleased? Sigh!

In keeping with Larkin Poe's seeming effort to try to get you to NOT buy their albums, the official cover of "Reskinned" is exactly the same as "Kin" in every way, except for the different title, plus it's in black and white. That makes it both confusing and worse than the nice color cover. It deserves a different cover, so I've made one here using a publicity photo from around the time of the album release.
Posted by Paul at 3:44 AM