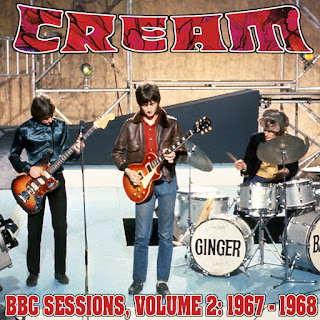 Here's the second of two volumes of Cream performing for the BBC. The songs are in rough chronological order. So while the first album covers 1966 to 1967, this covers 1967 to 1968.

As I did with Volume 1, I totally overhauled this album in November 2021. I ditched the use of versions from the official BBC album, as the sound quality is poorly regarded by serious fans. Instead, I relied on the versions used by Prof Stoned from his blog whenever possible. He worked with other serious Cream fans to figure out the best sounding versions, despite the fact they're all unreleased ones.

Also, as I explained with Volume 1, I don't like having two versions of the same song on the same album. So I've created another album called "More BBC Sessions," and I've put the best sounding versions on Volume 1 and here, and the lesser versions on the "More" album.

However,  there are four songs here that also are on Volume 1. That's due to the fact that these albums are ordered chronologically, and the band played some of the same songs at widely different times, often resulting in significantly different versions. For instance, "Steppin' Out" was played at the BBC in 1966, and again in early 1968. The other songs found of both volumes are "Sunshine of Your Love," "White Room," and "Crossroads."

Boy, how I hate Brian Matthew! He's the smarmy sounding BBC DJ who loved to talk over BBC broadcasts of great 1960s and 1970s bands like the Beatles, the Who, the Kinks, Led Zeppelin, and many more. He reminds me of a real life version of Troy McClure, a Z-list actor and product promoter voiced by Phil Hartman in the first few years of The Simpsons TV show.

Matthew's voice mars nearly every archival BBC release out there. Luckily, he only spoke over one song on Volume 1. However, he marred four songs in this volume, which are marked with
"[Edit]" in their titles. I used the X-Minus audio editing program to wipe those vocals while keeping the underlying music.

Two more songs have "[Edit]" in their titles for different reasons. An excellent sounding version of "We're Going Wrong" only lasted about three minutes out of four and a half. There's a lesser quality version for the last minute an a half. I edited the two versions together so one can hear the complete thing with the best sound quality. There's a very noticeable drop off between versions though. Also, the lead vocals to "White Room" were too quiet for my tastes in places, so I used X-Minus to boost those vocals.

Unfortunately, although Cream stayed together until around the end of 1968, their last BBC session was in January 1968. This predates their last two albums, "Wheels of Fire" and "Goodbye." So to get more of their later songs represented, I used alternate sources for the last six songs. The first three of those come from the French TV show "Bouton Rouge." You shouldn't notice the change in terms of sound, because they performed for the show without an audience present.

The last three songs do come from a concert. Technically, these are sourced from the BBC, because they come from a BBC documentary about the band called "Farewell Concert" that extensively used film footage of their last concert as a band in November 1968. This documentary was heavily criticized when it came out for its poor sound, as well as having talking over parts of the songs, and generally having poorly shot video footage. Furthermore, the band members didn't think much of their final show performance. Luckily, this documentary was released on DVD many years later, and that version improved the sound and got rid of the talking over the music. So I've used those versions. The poorly shot video footage doesn't matter to the audio. As to the performances being disappointing, I've only chosen three of the better played songs for that reason.

By the way, technically the song "SWLABR" doesn't have a subtitle, but I added one - "She Walks like a Bearded Rainbow" - because so few people know what the band intended "SWALBR" to stand for. Don't ask me what the heck it means though!

This album is 59 minutes long.

For Volume 1, I used a photo of the band playing on the "Ready Steady Go" TV show in 1966. I believe this is also from that show, but for an appearance in 1967.