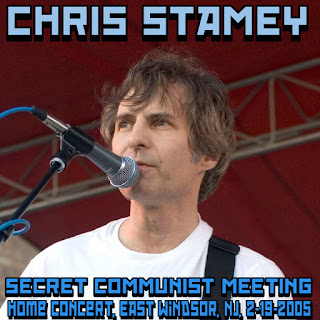 Chris Stamey has had a musical career since the 1970s and has been involved in many bands and projects, but he's best known for being one of the two main creative forces in he dB's. You can read more about him at his Wikipedia page here:

I'm not a huge follower of his career, but recently, musical associate Lil Panda sent me this bootleg, which apparently has never publicly circulated before. Both the sound quality and performance quality is so good that I felt compelled to share it.

This concert took place at someone's house, with an audience of probably only a couple dozen people, judging by the clapping sounds. It's not a soundboard, but in a venue that small and intimate, that hardly matters. What does matter is that it was recorded well. The volume of the applause at the end of each song was too loud, so I turned that down, and the volume of the banter between songs was too quiet, so I turned that up. Otherwise, there were no problems to speak of.

In the year this concert took place, he had a new album out, called "A Questino of Temperature." But he didn't play much from that. The concert has songs from all stages of his career, including old dB's songs, plus a few covers (like "Expecting to Fly" by Buffalo Springfield" and "Let It Be Me" by the Everly Brothers. He played acoustic guitar, and was backed up by one or two others, including some piano.

The concert is two hours and four minutes long. I called it "Secret Communist Meeting," because he made a couple of playful references to that in his banter between songs.

Since I'm not that knowledgeable about Stamey and the dB's, I got help from Rob of the excellent blog DBs Repercussion, which can be found here:

He helped me get the correct song titles. A few of the songs are unreleased, so the titles are speculative: "Remedy (I Want a Cure)," and the snippets "Street Team" and "Back It Up."

The cover art photo features Stamey at a dB's concert in Chicago in 2005.