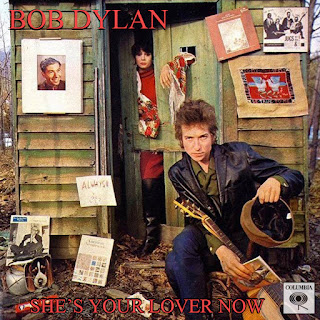 Some weeks ago, I posted a bunch of Bob Dylan's hotel room demos from 1966, because I made significant edits to all of them. This post is very similar to that one, because the purpose here is to gather up all of Dylan's quality stray tracks from 1966, and four of the nine songs (plus the bonus track) here are exactly the same as those hotel room demos. This is more complete, so I recommend you go with this over that previous posting.

Most every song here has something odd about it. The first one, "Freeze Out," is actually an early version of "Visions of Joanna," and basically has the same lyrics and melody, despite the different title. But it's taken at a significantly faster pace, making it over a minute shorter. I like this fast version enough to include it here.

"Lunatic Princess" has lots of potential, but unfortunately Dylan stops after just a minute and a half. We'll probably never get to find out how the rest of the song goes, but part of it is better than nothing.

"She's Your Lover Now" is a real highlight. Unfortunately, the band broke down and stopped the song not long before it was to finish. There's an acoustic version that finishes the song. Soniclovenoize of the Albums That Never Were blog put together a nice edit using the last bit of the acoustic version to finish off the band version, and I'm using his version here.

"Tell Me Momma" is a Dylan original, but it was only ever done in concert, for some strange reason. So I used a lesser known officially released version and eliminated the crowd noise.

Aside from "I'll Keep It with Mine," the one song here that doesn't need any special comment, the rest of the songs are from the hotel room tapes, and have all been heavily edited by me. For a detailed explanation on what I edited and why, check out my blog post about it:

The short version is that these 1966 demos were officially released on the 18 CD version of the "The Bootleg Series, Vol. 12 - The Cutting Edge" in 2015 but they were in raw form and in very rough shape. Generally speaking, more than one take of each song was included. In most cases, I had to piece together a full version of each song because the song would stop and start, sometimes more than once, due to Dylan not knowing the songs well.

There's one especially tricky bit on "Positively Van Gogh" where Dylan's voice sounds strange, almost as if he just sucked on helium and his voice is too high. That's because I combined two takes in different keys. For the last verse, I had to change the key in a music editing program, so his voice changes too. Please forgive the strangeness. I figured it was better to have that than to have the song incomplete.

I've moved one of the hotel room demos, "Don't Tell Him, Tell Me," to a mere bonus track here, because upon listening to it again, I decided the sound quality isn't up to snuff with the rest. One can't even make out his words most of the time. But it's here if you can overlook that.

The cover art is a photo from 1965. I'm not sure, but I'll bet it was an alternate for the "Bringing It All Back Home" cover. Even though this music is from 1966, that photo just cries out to be used as an album cover, so I'm using it. ;) By the way, the woman looking through the doorway is Sara Lownds, the subject of the song "Sad Eyed Lady of the Lowlands" and many other Dylan songs from this era. (Note the similarity between her last name and "Lowlands.")
Posted by Paul at 1:34 AM