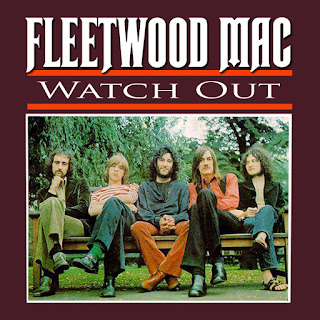 Fleetwood Mac only released one studio album of all new material in 1969, "Then Played On," but it was a very busy year for the band. Guitarist Peter Green would start having serious mental problems in 1970 that would lead to him leaving the band and then quitting music altogether for some years after that, so 1969 ended up being the peak of of the Peter Green-led Fleetwood Mac years.

There are so many stray tracks from 1969 that I've made three albums just for the year. This is the first. Actually, this one isn't exactly a stray tracks compilation, because most of the songs come from one studio album which was released in 1969. It's just that I'm not a big fan of the album, so I'm only taking some songs from it to add with some other songs to make a full album.

I speak of the album sometimes known as "Fleetwood Mac in Chicago," but also sometimes known as "Blues Jam in Chicago." It's a double album of Fleetwood Mac playing with seven blues veterans in Chicago. It's not really a studio album of all new material because it's more of a collaboration with those blues musicians, generally doing blues standards instead of originals. The problem for me is that it just isn't that inspired, in my opinion. Allmusic.com gives it two stars out of five, and that's about what I would give it too. It sounds like a great match of musicians, but many of the songs just didn't have the band's usual spark. So I've taken what I consider the best performances by Fleetwood Mac (as opposed to the blues veterans), including all of the handful of original songs.

Even though it's a double album, I still didn't find enough songs I really like to make a full album out of it. So I've added four more songs to the end of Peter Green playing with the Brunning Sunflower Blues Band. True, technically these aren't Fleetwood Mac songs, but Green sings and plays as well as ever on these four songs. At least one official Fleetwood Mac compilation includes them as Fleetwood Mac songs, so I'm doing the same.

The end result is that this album is very heavily blues-based. Generally speaking, Fleetwood Mac in the Peter Green era tended to break up their blues with some other kinds of music, but every single song here is bluesy. I've saved the non-bluesy stray tracks for the other 1969 albums I've put together, so one can go all the way into their blues mode on this one.

For the cover, I used the cover of the "Fleetwood Mac in Chicago" album as the basis. But in addition to changing the text, I also changed the photo with a picture of the band in 1969.