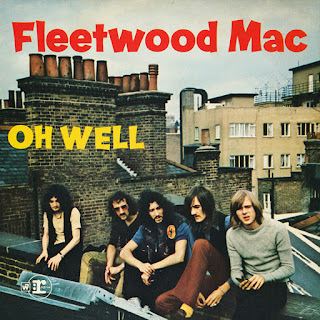 Here's the third and final of the three 1969 Fleetwood Mac stray tracks albums.

The key song here, which I've also made the title song, is "Oh Well." This was a big hit and remains one of the band's best known songs. Sometimes the lively, vocal "Part 1" gets played, and sometimes the longer, instrumental "Part 2" gets played with it. On the side, "Part 1" was the A-side and "Part 2" was the B-side. For this album, I've chosen to start it with "Part 1" and end it with "Part 2." But for those who prefer the full version, I've included "Oh Well, Parts 1 & 2" as a bonus track.

Aside from that, I've filled the album with other stray tracks. These are more "stray" than usual, since none of them are A- or B-sides. Instead, four are from the archival compilation "The Vaudeville Years." Two more were exclusively played live at the BBC. Another, "Lemon Squeezer," was only played live in concert, so I've used a recording from an official live album ("Shrine '69") and removed the crowd noise.

Note that I haven't included all the non-album tracks from 1969 that I could have - I only included what I considered the good ones. In particular, I don't have much fondness for most of the songs sung by band member Jeremy Spencer. Most of his songs were copies of other artists, especially Elmore James, or songs attempting to be humorous, or both. I find the copies unoriginal and the "humorous" songs unfunny. For instance, there was an entire EP of Spencer's songs called "The Milton Schitz Show" to be released as a bonus to the "They Play On" album, but the record company decided they weren't worthy of release (wisely, in my opinion). His parodies and copies probably were entertaining in concert, and added some variety to the band's sound as a whole, but they haven't stood up well as recordings.

This album is 48 minutes long, not counting the bonus track.

For the album cover, I used the exact cover of the "Oh Well" single. However, I removed some small text that said "Parts 1 and 2."