John Entwistle - Smash Your Head Against the Wall - Alternate Version (1971) 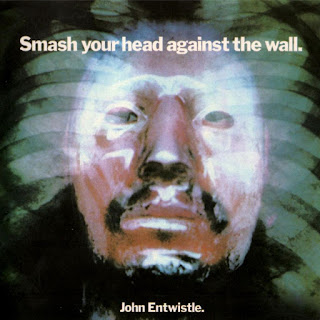 I've been asked to post more music from the Who. Indeed, it's been a long while since I've posted anything from them. But before I get to that, I feel I need to post this, because I consider it an important part of my Who collection.

John Entwistle, bassist for the Who, consistently helped out with songwriting for the band, typically adding a song or two for each album they did. He put out a bunch of solo albums as well, but his solo career is much less well known. Unfortunately, there's a reason for that. While his songs for the Who were consistently good and sometimes excellent, he didn't have enough good songs to fill his solo albums.

The one partial exception to that is his first solo album, 1971's, "Smash Your Head Against the Wall." It has a bunch of very good songs on it that I think could have and should have been done by the Who, but there were a couple of weak ones too. So I picked the best ones and added in the best songs from his next two albums to make an album that, in my opinion, can hold its own with most Who albums.

I included seven of the nine songs on "Smash Your Head." One of the two I didn't include, "Heaven and Hell," is a good one, but it's also the only song on the album that was done by the Who, and I think the Who version is better.

Note that I made a very drastic edit to the song "I Believe in Everything." I think it's a nice song, but I had issues with how it ends. Its format is a verse, then a chorus, then another verse. But then, instead of a repeat of another chorus as one would expect, it went into an outro section, which ends with part of the overplayed Christmas standard "Rudolph the Red Nosed Reindeer." I think the song was terribly arranged, and thee use of that awful Christmas song really ruined it for me. So I edited the song to repeat the chorus a second time where one would expect it, then I put in the outro, but I faded it out right before the Christmas song began.

In short, if you're just a casual Who fan and aren't interested in taking a deep dive into Entwistle's solo stuff, this is a "greatest hits" of sorts for you.

The cover art is simply the official version.
Posted by Paul at 4:58 PM

Email ThisBlogThis!Share to TwitterShare to FacebookShare to Pinterest
Labels: 1971, 1972, 1973, John Entwistle, Who