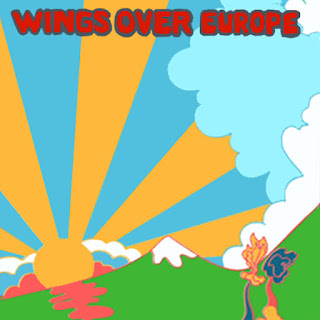 Here's something nice from Paul McCartney. Recently, he released deluxe versions of his early 1970s albums "Wild Life" and "Red Rose Speedway." If only you buy the rare super deluxe packaged version of both do you get an extra album called "Wings Over Europe." It's a compilation of the best soundboard recordings from live Paul McCartney shows from 1972 and 1973.

I had already had a live album I'd created myself that was nearly the exact same thing, drawn from the same four or five concerts where portions of each show had come out either officially or on bootleg. But I welcome the improved sound quality and consistency of this new official live album.

I wouldn't post this if it was just an exact copy of the recently released album, but I've added to it by including all the unique songs I had on my live album compilation that isn't on the official one. That means four songs from 1972: "Help Me," "Cotton Fields," "Say You Don't Mind," and "Sometimes I Can't Keep from Crying." I added those to the middle of the official album, since they aren't the kinds of songs that would either start or end a concert. (Three out of the four feature lead vocals by someone other than Paul McCartney, since Wings were almost a real band, and not just Paul's backing band, for a couple of years in the early 1970s.)

Additionally, I've added five songs from 1973: "When the Night," "Little Woman Love," C Moon," "Go Now," and "Live and Let Die." The official album only has one song that dates from 1973, "Big Barn Red." I generally kept the order of the official album, except I moved that one from being the very first song to putting it in a section at the end with all the other 1973 songs. Generally speaking, McCartney toured a lot in 1972 and played a wide variety of songs. (There are more I wouldn't or couldn't include because they either are only on poorly recorded audience bootlegs or they didn't get put on any bootlegs at all.) In 1973, he toured less, and only played a handful of new songs, which I have included here.

In 1972 and the first half of 1973, McCartney was trying to get his solo career started, generally by playing small venues at colleges in Britain and Europe without any advanced notice. In late 1973, he reestablished his critical and commercial reputation in a big way with the "Band on the Run" album, but he didn't tour for two solid years, until the second half of 1975. By then, everything had changed. He was huge, such as being on the cover of Time Magazine, and his concert tour was huge. So his 1972 and 1973 concerts occupy a unique and important part of his musical history.

The official "Wings Over Europe" album was already long, and with the nine extra songs I've added, it's even longer, at almost two hours. So enjoy all this high quality live music.

The main image for the cover art comes from a painting on the side of the tour bus the band used during this time frame - it's just a section of a larger work. Additionally, the writing also comes from a different part of the tour bus. I copied and pasted that to fit it over the painting.

Also, by the way, I still don't like to call these recordings "Wings" recordings, since I like keeping all my Paul McCartney music in one folder with his name, and I don't consider Wings to be a real band, just a backing band. But in the song list above, for the few songs where Paul is not the lead singer, I've added in the name of the lead singer first.