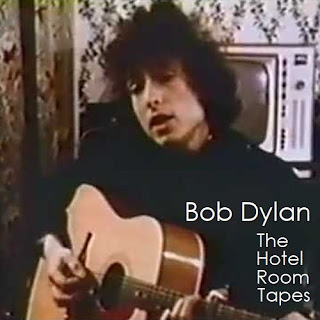 So far, I've mostly posted early Bob Dylan material, from 1961 to 1964. I've got a ton more Dylan stuff to post, and I'm trying to move through it all chronologically. Before I could tackle his 1965 to 1966 period though, I wanted to make some song edits to his 1966 "hotel room tapes," and now I have. I'll present these songs as part of a 1966 stray tracks album later, but I want to highlight them here while the edits I made are still fresh in my mind.

In 2015, the archival Dylan album "The Bootleg Series, Vol. 12 - The Cutting Edge" was released. You could buy it in various formats, but only if you bought the 18 (!) CD version would you get any of the songs on the 18th CD, which contains various raw and low-hi recordings made of Dylan in hotels in 1965 and 1966. The first half consists of duets with Joan Baez done in 1965. I'm only dealing here with the second half, which is of songs Dylan did in two hotel rooms in 1966, with guitarist Robbie Robertson accompanying him.

Most of these 1966 songs are really interesting. No doubt, most or all of them would have been included on Dylan's follow-up album to his classic "Blonde on Blonde." Except Dylan got in a motorcycle accident later in 1966, and in the wake of that he decided to do in a very different musical (and personal) direction. So these songs were left behind, and the only records we have of them are from these hotel room tapes.

However, there are problems with the recordings. For starters, the recording quality ranges from okay to terrible. (I didn't include one original song,"If You Want My Love," because the sound quality is so bad and hissy.) But also, the songs were brand new at the time, and Dylan generally didn't play them all the way through successfully, because didn't know them well yet. So what I've done is stitch the different performances together to get the best Dylan versions of these songs we'll probably ever have. I also tried to eliminate the many flubs and coughs and the like.

The first song, "What Kind of Friend Is This," is fairly unedited by me. Dylan makes it through the song without any flubs or stops, and the sound quality is pretty good. But the song came to a sudden end after just a little over two minutes. I decided there was no good way to fix that, so I left the end as it is.

"I Can't Leave Her Behind" needed much more editing. This is a very nice song, with Dylan using a sound and voice similar to his country-ish "Nashville Skyline" era a few years later. Unfortunately, the song was cut in two on the official "Cutting Edge" version. Dylan made it through the first verse fine. But when he got to the chorus, he flubbed the chords like five times, starting it again each time. I simply edited out the flubs to make it sound like he got it right the first time. Then the first take ended shortly after the chorus, so I stitched in the rest of the song from the second take. There were more flubs there, but I edited them out. The verse lyrics are different, so by combining the two takes, I believe one gets the full song.

By the way, I didn't do anything with the song "On a Rainy Afternoon" because if you listen to it closely, it's actually the same song as "I Can't Leave Her Behind." The lyrics are significantly different, but the chords and melody are basically the same. Plus, all that was recorded is a minute and a half snippet, so there's not much to work with.

"If I Was a King" is the only non-original here. It apparently actually is a variant of an obscure Scottish folk song called "If I Were King of the Forest" (not to be confused by a song from "The Wizard of Oz"). Dylan recorded the song in a hotel room in Scotland, so maybe the location inspired him to remember it and do it. The song was recorded well. (There were a couple of loud coughs, but luckily they were during pauses between singing, so I was able to patch in fixes for them.) The main problem with the song is that Dylan stopped the song right in the middle, after doing the first verse and chorus. Then, for the second take, he did the second verse and chorus, apparently taking the song to the end. So I stitched the two takes together. I also used some instrumental snippet later in the song to add in an introduction, since Dylan and Robertson talked over the intro while they were fumbling around to find the right chords.

"Positively Van Gogh" presented a big challenge for me. The official "Cutting Edge" CD included three takes of the song. The first take was short and of no use to me. The second take included four verses, but then it stopped. The third take picked up where the second one left off and had the fifth verse. However, Dylan moved the capo on his guitar between the second and third take, changing the key. I tried my best to merge the second and third takes, but it's really tough when the takes are in significantly different keys. I could use my music editing software to change the pitch, but the problem is, if you do that very much, the song of Dylan's voice changes quite noticeably, until it no longer sounds like him.

So what I did was lower the pitch on the second take and raise it on the third take, so the two could meet in the middle. I did that successfully, and I believe it makes a pretty seamless transition for the guitar. But there's a cost in that the sound of vocals do get altered some. You'll probably notice the change between the fourth and fifth verses. It's unfortunate, but it's either that or not getting the entire song put together as one performance. If anyone else knows how to merge these together in a less noticeable way, please let me know.

(Apparently there was a sixth verse, but Dylan only got halfway through it on yet another take that only exists on a bootleg, so there's no way to fully restore it.)

The final song here, "Don't Tell Him, Tell Me," had lots of hiss on the official "Cutting Edge" version, and only one take was included there. Luckily, I found a bootlegged version with much less hiss that contained three takes, so I used that instead. Unfortunately, the sound quality is still wanting. The overall sound is okay, but for some reason Dylan's voice comes through poorly, making it very difficult to hear his lyrics. I still think it's a nice song with a good melody though, so I worked on it anyway.

Of the three takes I found, the second and third ones were useful. The second take included all of a verse and chorus, but then it stopped. A different verse was included on the third take, but it stopped before the chorus. So I stitched the two takes together. Then I added in the one good chorus to the end of the second verse to make a complete song.

So there you have it. All in all, this makes up 19 minutes of acoustic versions of five otherwise lost songs by Dylan in his prime 1965 to 1966 era. Yeah, purists may have issues with all the editing I did here. But I'd rather have these edited versions than the bits and pieces on "The Cutting Edge" with all the flubs and coughs and such. Virtually everything Dylan did in 1965 and 1966 was awesome, with three albums he released in that time all included in lists of the greatest albums of all time. These songs definitely fit in with the rest of his music from that time. I especially like "I Can't Leave Her Behind" and "Positively Van Gogh."

I hadn't intended for this to have an album cover, since it's only a collection of five song edits, not a proper album. But Peter at the Albums I Wish Existed blog made one for me, so what the heck, here it is. ;)
Posted by Paul at 11:14 PM