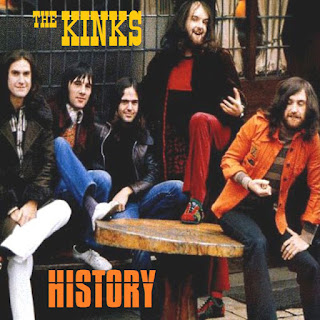 I previously didn't have much in the way of Kinks stray tracks from this time period. However, in the past couple of months, the song "Time Song" was released. (It was on a super deluxe edition of "The Village Green Preservation Society" album, but actually dates from 1973.) More importantly, Dave Davies' archival album "Decade" was released, with a lot of songs from this time.

Actually, there are so many Dave songs that he gets a slight majority over his brother, six to five. Ray Davies was almost exclusively focused on writing songs for a series of Kinks concept albums during this time. I would guess he must have written some songs that didn't fit the concepts. Hopefully those will be released someday.

"Scrapheap City" was on the "Preservation, Act 2" album, but that version had a female vocalist singing it. This version is sung by Ray Davies.

Thanks to Peter at the Albums I Wish Existed for the cover art.
Posted by Paul at 1:48 PM