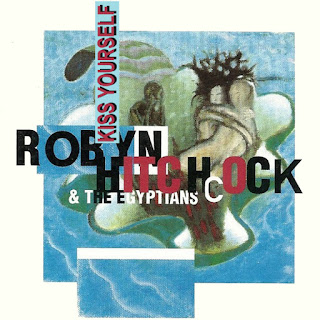 All the songs here are officially unreleased. There's a bootleg that contains high quality sound versions of studio songs considered for the "Perspex Island" album. Seven of the ten songs are from that bootlegs. The remaining three are from concert bootlegs. Pretty much all the songs are acoustic in style.

"Perspex Island" is widely considered one of Hitchcock's weaker albums, done in by misguided production. I don't know what the thinking on the song selection was, because I think most of these songs are as good as the ones on that album.

I called this album "Kiss Yourself" because that's an album title Hitchcock considered, but didn't use, in the early 1990s.

For the cover art, I used the cover to the 1991 single "Oceanside." I changed the text of the sideways text.
Posted by Paul at 5:21 PM