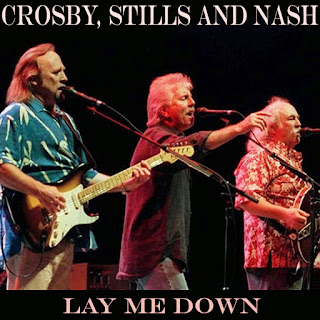 It's high time for some more Crosby, Stills and Nash (CSN). Most recently, I posted a couple of CSN albums with Neil Young in the late 1990s and early 2000s. But from here on out in this imagining of the CSN/CSNY albums that might have been, we leave Young behind. CSNY did tour in 2006, but they just did songs from Young's latest album plus greatest hits. There hasn't been any real CSNY collaboration on new songs since 2002.

This album is mostly about David Crosby and Graham Nash. As the Crosby-Nash duo, they hadn't put out a new album since the late 1970s, but they put out a double album in 2004 simply called "Crosby and Nash." Most of the songs here are from that album. But only three of the exact performances are from the album. The rest are live, sometimes as CSN.

(I wish I could have more CSN performances of those songs because I know they did a lot in concert, but I've only found one excellent sounding bootleg from the era. If you know of others, please let me know.)

Unfortunately, this album doesn't have a lot of Stephen Stills on it. His three songs here come from his 2005 "Man Alive" album. Generally speaking, this time period wasn't a good one for Stills, apparently due to some particularly bad drug troubles he was going through.

But CSN was always a group where the whole was more than the sum of its parts. And with five Nash songs, four Crosby songs, and three Stills songs, I think one ends up with an album that's much stronger than any of their solo (or duo) efforts from around this time.

The cover art was made by Peter from his Albums I Wish Existed blog. I don't know what year the photo dates from.
Posted by Paul at 4:57 PM