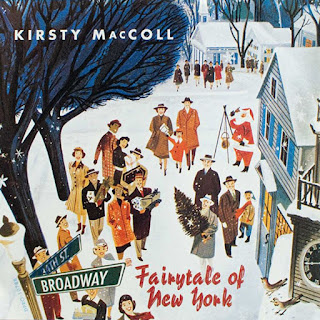 I've posted three Kirsty MacColl albums already, as I move chronologically through her career. Those three all contained many good songs, but this is when she really began to hit her stride.

The highlight here has to be "Fairytale of New York," a duet with the Pogues that is the most played Christmas song of the 21st century in Britain. Incredibly, it hits the charts pretty much every single Christmas season there. It's not nearly as well known in the US, however, but it should be.

That song, plus the first two here, were recorded at a time when MacColl was having a prolonged dispute with her record company. She wasn't really free to put out her own music until 1989, when she released her album "Kite." The remainder of the songs here are B-sides from singles off that album. But I would argue that most of these are just as good as the songs that made the album.

The cover was found by Peter of the Albums I Wish Existed blog. It's from a rare single of "Fairytale of New York," with the Pogues name removed.