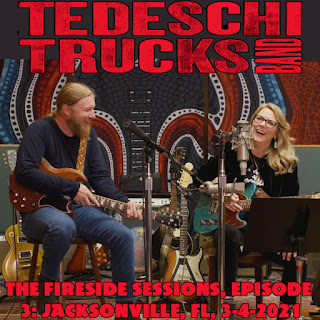 Here's something from an artist I've never posted music from before. The Tedeschi Trucks Band is a "jam band" with no less than 11 members, led by the married musical couple Susan Tedeschi and Derek Trucks. Tedeschi does most of the singing, and also plays excellent lead guitar. Trucks, a former member of the Allman Brothers Band (and nephew to founding ABB member Butch Trucks), does the slide guitar. Rolling Stone Magazine has once listed him as one of the top 20 guitar players of all time.

Given that the band has 11 members in it, it goes without saying that when they play, their music has a full sound. But due to the coronavirus pandemic, they were left unable to play concerts for most of 2020 and part of 2021. Some of them got together and recorded six home concert during that time, each with different line-ups. One has to pay to view these concerts through nugs.net. I don't want to take all that material away for free here. But I think it's okay to post one, as kind of a teaser, to let people know the others are available.

I decided to pick the third episode. That one, plus the fifth one, are unusual in that they feature only the two main members, Susan Tedeschi and Derek Trucks, playing in an acoustic format. One or both of them use electric guitars on some songs to help with the lead guitar soloing, but it's just them and their guitars. They did a nice mix of originals and covers, with most of the originals being songs they haven't played that often with the full band.

Normally, I'm not that into jam bands, because I'm mainly about solid songwriting, and I often feel the soloing talent covers up a lack of songwriting talent. But in this case, it can't be denied these two people have talent up the yin yang, with Tedeschi's vocals being a particular highlight.

This album is exactly one hour long.

For the album cover, I was able to use a screenshot taken from the exact concert in question.