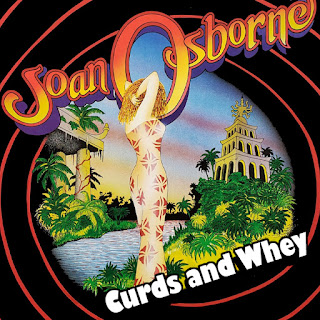 I plan on posting a bunch of Joan Osborne stray tracks albums soon. But this is not exactly one of those. Instead, I'd call it a lost album. A couple of weeks ago, I posted another lost album by her, from the early 1990s, called "Chick." This is a similar lost album from the late 1990s. Like "Chick," nearly all of the songs are originals. I'll post a stray tracks album soon covering the same time period that contains songs from movie soundtracks, various artists compilations and the like that are mostly cover versions.

In 1995, Osborne had a big hit with the song "One of Us" and with the album "Relish." But then she didn't release a follow-up album until 2000. That was a remarkable amount of time, considering the importance of wanting to follow up a hit while the iron was still hot. What the heck happened?! As you'll see from listening to this album, she had a good album of original songs that was ready to be released by 1997, or 1998 at the latest.

What happened was the record company. You can read an account of it here:

Here's my summary. At the time, Osborne was signed to Mercury Records. They were delighted with her unexpected hit "One of Us," and naturally wanted her to have another hit just like it. But Osborne was (and is) a serious musician, and didn't want to be put forward as a pop star. Here's a quote (from the linked article) by David Lowery, a member of the band Cracker who worked with her during that time: "I know she was bummed out by her relationship with her label. I think they totally misunderstood her as an artist. She's a great rock female voice, a down and dirty, ballsy singer, and they wanted her to do poppy, VH-1 stuff."

So the label flat out refused to release her new album, even though "Relish" went triple platinum in the US. She refused to remake herself the way they wanted, so a stalemate ensued. Then things went from bad to worse in the late 1990s when Mercury Records merged with another record company, and the few supporters she had in the company left. So she was dropped from the record company altogether by the start of 2000.

Think about how crazy that is. She'd sold millions of records, but the record company wouldn't allow her to release a follow-up AT ALL, for five years! To make matters worse, they owned the rights to all the songs she'd recorded for her planned follow-up, and they refused to let her release them for an album on another label. Thus, the songs here are all still officially unreleased in any form. Instead, she had to come up with a different bunch of songs for her next album, "Righteous Love," which was released in 2000. (Apparently, two songs from her planned follow-up album, "Hurricane" and "Baby Love," did manage to make it onto that album somehow, so they're not included here.)

The album she wanted to release was supposed to be called "Curds and Whey," which is a phrase mentioned in the first song, "Sensitive," and is also well known from the "Little Miss Tuffet" nursery rhyme. Unfortunately, none of the studio versions of any of these songs have been made public on bootleg. But, fortunately, she did most of them in concert, and there are bootleg versions of most of those.

Like her lost album "Chick," most of what I know about this album comes from a Wikipedia page that only exists on the Portuguese version of Wikipedia for some reason. That can be found here:

I used the song list from that page to find as many of the songs as I could. I was able to find versions of all of them except for "Hillbilly." However, the sound quality of one song, "Beautiful Things," is pretty rough, so I've only included that as a bonus track. Also, I didn't include her cover of the classic Commodores funk hit "Brick House" because the album was already pretty long without it, and it didn't fit that well. I've put a version of that on the stray tracks album that covers this same time period. Plus, as I mentioned above, "Hurricane" and "Baby Love" weren't included because versions of those went on her next album.

That leaves 48 minutes of music, if you don't count the bonus track. All of the songs are originals, with the exceptions of "Spooky," a 1960s classic by Classic IV, and "Mind Full of Worry," a 1995 song by the relatively obscure band the Aquanettas. "Spooky" has "[Alternate Version]" in the title, because she did another version around the same time that I'm putting on the stray tracks album mentioned above, and apparently that's the original one she did.

It seems she didn't play these songs in concert that often. In some cases, I was only able to find one decent version. So the sound quality ranges from good to very good, but isn't great. Hopefully someday the legal issues will be resolved and the studio versions of these will be officially released. Until then, this is probably the best version that can be made out of what is publicly available.

Joan Osborne has gone on to have a long, successful, and critically acclaimed music career that is much more than just the one-hit wonder status of "One of Us," so she gets the last laugh over her record company. But still, if I were her, I'd be pissed at how her early career got treated. If some version of this album had been released, odds are good she would have kept more of her momentum going, instead of pretty much having to start over in 2000. And the failure to release "Chick" and all the originals on that is another big lost opportunity.

For the cover art, I found a poster of a concert she did at the Warfield Theatre in San Francisco from 1996 that I liked. I had to make some changes though. For starters, as usual, I had to make some major clips to get the rectangular poster shape to fit in a square space. Then, the name of the supporting act was written near the bottom in the space I chose, so I overwrote that with the "Curds and Whey" album name.