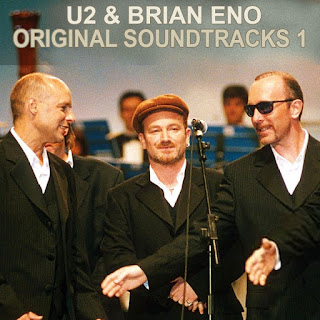 As I continue to work my way through U2's career, I come to 1995 and the curious album "Original Soundtracks 1." This album has largely been overlooked by U2 fans because it was credited to "The Passengers" instead of U2. But that's just a name for the four members of U2 plus their frequent producer Brian Eno. The "Passengers" name never caught on, since they've only done the one album, so I'm going to call a spade a spade and credit this to U2 and Brian Eno.

The other main reason this album is "Original Soundtracks 1" is often overlooked is because it's different than the typical U2 album. It's more atmospheric and experimental. And, to be frank, I don't think it's up to their usual standards. Clearly, they were making the songs up as they went along, and some of their ideas worked and some of them didn't.

But there was a lot of good stuff on it. The album would have been a lot better if they'd cut the album length down. This is another case of "less is more." The original album is an hour long. I've cut that down nearly in half, to 37 minutes. In so doing, I generally removed the more experimental and atmospheric songs, and favored the ones with more vocals and song structure.

That's not all I did though. I also have added three songs to the end. One of them, "Slow Dancing," was released as a B-side in 1993. I already included an acoustic version of that song on the previous album in my U2 albums series, and I didn't want to put two versions on the same album. Plus, there's another version I want to put on my next U2 stray tracks album that's significantly different, since it's a duet version with Willie Nelson. So its best fit is here.

The two other songs I've added, "In the Name of the Father" and "You Made Me the Thief of Your Heart," are Bono songs from 1994. I've included them because they're good songs that are from the right time period. But also, in my opinion, they perfectly fit the same music mood as the "Original Soundtracks 1" songs. Clearly, Bono was going through a certain musical phase, and they were part of that phase. By the way, "You Made Me the Thief of Your Heart" is officially unreleased, but it sounds as good as any released track.

Note that I have some other songs from 1995, most especially U2's hit single "Hold Me, Thrill Me, Kiss Me, Kill Me." But those have a different sound to them. I'm saving those for my next U2 stray tracks album, which covers the time between this album and U2's 1997 album "Pop."

After the changes I've made, this still isn't a great U2 album, on the lines of "The Joshua Tree" or "Achtung Baby." But it's a very good one, if you're willing to go along with them in a more atmospheric direction. It certainly deserves more attention than it's received so far.

For the album cover, I could have just used the existing cover to the officially released version of the album. But I figure this version is different enough to merit its own cover. I couldn't find any photo of the four members of U2 plus Brian Eno together in the right time frame. But I did find one of the two most famous members of the band, Bono and the Edge, with Eno, so I've used that. The photo was taken at a benefit concert in Modena, Italy, in 1995. From left to right, the photo shows Eno, Bono, and the Edge (in the glasses).
Posted by Paul at 1:52 AM

Email ThisBlogThis!Share to TwitterShare to FacebookShare to Pinterest
Labels: 1994, 1995, Brian Eno, U2