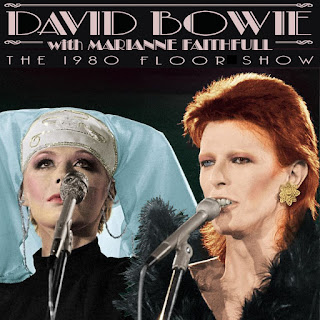 I've posted five albums of David Bowie's BBC's performances, and I have one more to go. But before I post that one, I'm posting this, which is related. This was an hour long TV show that was a special edition of the weekly musical show "The Midnight Special."

In late 1973, Bowie had a peak of popularity at the tail end of his "Ziggy Stardust" phase (he'd have other peaks later). He'd put out the "Aladdin Sane" album early in 1973, and then the "Pin Ups" covers album on October 19, 1973. This show was meant to promote that album. (Although there were live performances that were filmed from October 18th to 20th, it wasn't broadcast until November 16th.)

Variety TV shows were all the rage in the 1970s, and Bowie wasn't popular enough to carry the show all by himself, so he brought along some musical guests that he liked. The chief one was Marianne Faithfull. I've included her performances as well as Bowie's, because I like her stuff. Plus, they did a duet together. The Troggs and a Spanish flamenco group called Carmen also played a couple of songs each, but I didn't include them. I like the Troggs, but their performances didn't impress me (they were way past their 1960s prime). I also wasn't impressed with Carmen, so I left their stuff out as well. If you want the full show, there are other bootlegs that have them.

This recording is rather unusual in that there's no crowd noise at all. Bowie and the others rehearsed and filmed their performances for three days straight, and some of those have crowd noise and some don't. I picked the ones that don't, for greater sound quality.

Note that this show was the very last time Bowie heavily referenced his Ziggy Stardust persona with his appearance and costume. But he also was already looking forward to his "Diamond Dogs" persona, which would result in the album of the same name in 1974. The show had the strange title "The 1980 Floor Show" despite taking place in 1973, because of his song "1984," which he played and would feature on the "Diamond Dogs" album. It's a play on words - think "1984 show."

The songs are presented in the exact same order they did on the TV broadcast, minus the Troggs and Carmen songs.

For the album cover, I started with the cover of a popular bootleg of the show, because I liked the font used. I made some changes to the text to include Marianne Faithfull's name. Then I found a good photo of Bowie and Faithfull together. However, they were separated by a couple of feet, so I edited the photo to move them closer together.
Posted by Paul at 9:18 PM