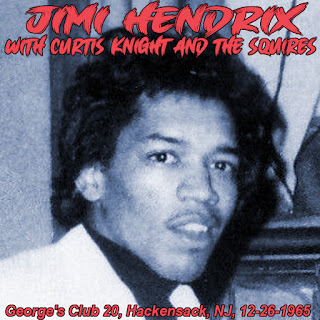 In September 1966, an obscure lead guitarist known as "Jimmy James" changed his name to Jimi Hendrix ("Hendrix" being the last name he was born with), moved to England, got a new band, and quickly became a superstar. But what about his music prior to that? He did head his own band, known as "Jimmy James and the Blue Flames," for much of 1966. Unfortunately, no recordings of them are known to exist. However, I've managed to create an album of a Hendrix concert all the way back in December 1965, thanks to some selective editing. The sound is a little rough, but I consider it a great listen for any serious Hendrix fan.

To better explain what I did here and why, I need to explain more of Hendrix's early musical career. Starting in 1963, he spent a few years as a little-known side man and session musician. Generally speaking, he played guitar for well known soul artists like the Isley Brothers and Little Richard when they toured. He found this very frustrating, because his incredible skills were very little used. In 1965, he began playing sometimes with Curtis Knight and his band the Squires. Knight was fairly obscure himself, so he didn't have a big ego, and he recognized Hendrix's talent. As a result, Hendrix was given much more of the spotlight than before, getting to sing quite a few songs while also showing off his lead guitar prowess, including doing showy tricks like playing solos with his teeth.

In December 1965, Knight recorded at least one concert at a small club, George's Club 20, in Hackensack, New Jersey. We know one of the concerts occurred on December 26, 1965, because Knight mentioned the date in his between-song banter. But many of the songs were played twice, suggesting that the band played two concerts that evening, or shows from more than one night were recorded. There's a surprising lack of audience noise on the recordings, and some of it seems to have been added in later, so it's not entirely clear if these were really live recordings, or done in the studio, or maybe played at something similar to a soundcheck, with a nearly empty club.

In any case, these December 1965 recordings appear to be the only early "live" recordings of Hendrix that have survived. A double album bootleg version has floated around for many years. In 2017, Hendrix's record company issued an official version called "Live at George's Club 20" that's half as long as the bootleg. Unfortunately, the sound quality of the official album and the bootleg are about the same, and both leave something to be desired. This music sounds better than a typical audience bootleg from the era, but not as good as a professionally recorded live album from that time, or even a well-recorded bootleg soundboard.

For legal reasons, the official album couldn't mention Hendrix's name on the cover, not even in small print. To make matters worse, a majority of the songs were sung by Knight instead of Hendrix. To be honest, most of the songs are bar band-like versions of soul music hits, sung by someone (Knight) with merely a good voice instead of a great one. Because of these reasons, plus the rough sound quality, the album has remained obscure, even for most Hendrix fans.

But wait! I'm knocking these recordings a lot, but there is a real gem of an album buried within them. I've collected just the songs sung by Hendrix from the official album, plus a few that they'd missed from the bootlegs of the same show(s). By focusing on just that material, one gets a fascinating view of how developed Hendrix's musical talent already was in late 1965. His guitar skills were already extraordinary, and unlike the limited studio recordings he did in those early years where he rarely got to solo, he soloed all over these songs. A few even are instrumentals meant to highlight his guitar prowess. A good portion of the songs he sang were songs he continued to perform after he got famous ("Killing Floor," "I'm a Man," "Driving South," "Bleeding Heart," and "Day Tripper"). One song, "Come On," even made it's way in modified form onto his classic "Electric Ladyland" album.

Nearly all the songs sung by Knight that I didn't include were pop and/or soul hits. Some of them were in the charts at the time the recordings were made. By contrast, the Hendrix-sung songs were significantly more bluesy, including some obscurities, such as Albert King's "Travelin' to California." It's almost like discovering a different concert inside the larger concert. (By the way, "Driving South" is often considered a Hendrix original when it's shown up on some of his albums after he hit the big time. But it's basically the Albert Collins instrumental "Thaw-Out" with some lyrics added.)

Unfortunately, the song order is all jumbled up. The order on the bootleg is different from that of the official album, and both of them are probably different from what was actually played that night, or nights, considering that we don't even know how many concerts the songs are from. So I've made some changes in the order for musical flow reasons. But I've kept the between song banter (which is mostly by Knight) in the right places whenever possible. I put all four songs that come from the bootleg instead of the official album at the end. But, as I said above, the sound quality of those are about the same. However, one of those songs, "Bleeding Heart," got cut off halfway through, and fades out. That's probably why it wasn't included on the official album, even though it's a Hendrix showcase.

I'm happy to say that after the Knight-sung songs are removed, one is left with about 50 minutes of music, which is a nice album length. (Knight does sing back up on some of the songs here, and co-lead on a couple, such as "Day Tripper." He also does most of the vocals for "Driving South," but that's mainly an instrumental.) I think it would be quite similar to what Hendrix probably played a few months later when he fronted his own band, Jimmy James and the Blue Flames, except that Knight is basically the MC doing most of the talking between the songs.

In my opinion, this album is a classic case of "less is more." The Knight-sung songs are worth listening to, especially since Hendrix played guitar solos on some of them. But when I had the full recording dominated by Knight, it was a historical curio that I hardly ever listened to. Now that I've boiled it down to the Hendrix-led songs, I enjoy it more and listen to it a lot more. I hope you'll feel the same way.

Believe it or not, there actually are photos of Hendrix playing at the George's Club 20 from around the date of the concert. But they're black and white and low resolution. Instead, I decided to use a publicity photo of Hendrix as part of Knight's band from around that time period. It was high resolution enough for me to be able to zoom in on just Hendrix's head, so you could get a good idea of what he looked like at the time.
Posted by Paul at 11:46 PM