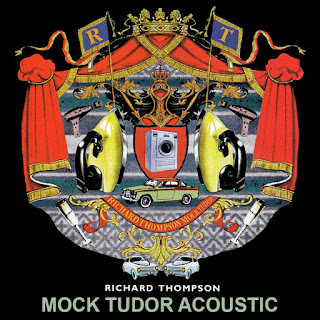 In 1996, Richard Thompson put out the double album "You? Me? Us?" which was a critical and commercial disappointment. In 1997, he put out "Industry," but only half of it was his music, and it was mostly ignored. In 1999, he put out "Mock Tudor," which was one of his best and most popular albums. This is the acoustic version of that, so it's very strong as well.

In the past, I've put out all-acoustic versions of some of Thompson's albums. I can only do that for some though, because sometimes he simply hasn't played enough of them in solo acoustic format in concert. For "Mock Tudor," there's just enough. The original album has 12 songs on it and lasts 55 minutes. I was able to find nine of those songs in acoustic format. Those nine only total 38 minutes. The studio versions of those nine songs totals to 39 minutes, so the acoustic versions about roughly the same length.

For the other three songs, he's played "Hard on Me" and "Two-Faced Love" occasionally in concert, but it seems he's always done them with a full band. Both of them are on the official live album "Semi-Detached Mock Tudor," which is pretty much a live, full-band version of "Mock Tudor." Many think it's better than the studio album.  The other song I don't have here, "That's All, Amen, Close the Door," apparently has only been played live twice, and I haven't been able to find any recordings of those. If you have such a thing, please let me know.

I'm happy to say the sound quality of the songs here are uniformly excellent, even though all but the first two are unreleased and come from concert bootlegs. As I usually do in cases like this, I've removed the audience noise to make it sound like a studio album. Also, as I do with these all-acoustic versions of albums, I used the best sounding performances I could find, regardless of year of performance. Most of the versions here are from 2000, but the full range goes from 1997 to 2013.

This album cover is strange to me, because it's totally different from the studio album version, yet it seems to be an alternate cover approved by Thompson. I wish that sort of thing happened a lot more often! :)

Apparently there's a deluxe version of "Mock Tudor" that doesn't have extra music but does have some extra artwork, and this cover was included as part of that. If you look closely, it even has "Richard Thompson Mock Tudor" written into the artwork. All I did was reposition things a bit so I'd have room at the bottom, and then I added the text there. I used the same font and font colors as those on the studio album.
Posted by Paul at 6:39 PM