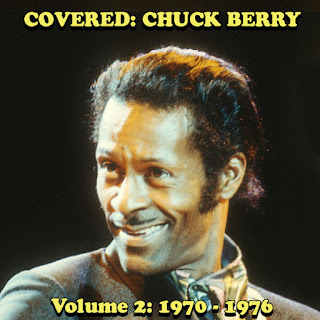 Here's the second of three albums in the "Covered" series celebrating the songwriting of Chuck Berry.

I said most of what I wanted to say in my last post, for the first album of the three. I'll only add what's particular to this album.

Berry started having lots of hits in 1955, the year rock and roll went mainstream. But his songs didn't get covered that much until about 1963 and 1964, which was the start of the British Invasion. I think it's safe to say the number of Berry covers peaked in the first half of the 1970s, as the rockers who grew up on Berry's music were their most popular, and before disco and punk shifted musical directions later in the 1970s.

Thus, I had way too many songs to choose from to make this particular album. I tried to include at least one song from each artist who were heavily influenced by Berry. For instance, I'm not much of a Status Quo fan, but they covered Berry as much or more than anybody, so I included a song by them.

Other versions were included many to make sure I had a cover for each of Berry's thirty of song best known and most frequently covered songs. For example, I'm not a big fan of AC/DC's version of "School Day," but the song was too important not to include, and I liked that version better than any other I could find.

Stephen Stills' version of "You Can't Catch Me" comes from his 1975 live album. It actually is part of a medley with the song "Crossroads." But I edited it out of the medley so the focus would remain on nothing but Berry songs.

I don't know where or when the photo I chose for the cover art comes from exactly. But the source where I found it claims it's from some time in the 1970s.
Posted by Paul at 4:12 PM