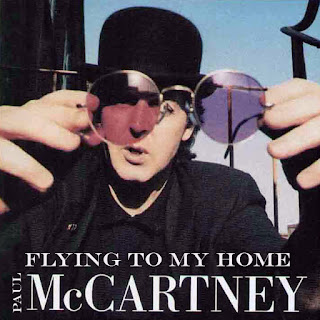 Paul McCartney has had such a prolific musical career that I still have a tong of stray tracks albums to post from him. So here's the next one. It mostly covers 1988 and 1989. It seems he was too busy in 1990 to do much recording, but there's one live song from that year too.

The first four songs were part of the songwriting collaboration between McCartney and Elvis Costello. I've already posted an album of acoustic versions the two of them did together. But these four songs are full-band versions by just McCartney of the relatively few songs from that collaboration that he didn't officially release at the time. They all come from the 2017 deluxe version of "Flowers in the Dirt."

Most of the rest of the songs are A-sides or B-sides. One of the A-sides is a cover of "Ferry 'Cross the Mersey" that was done to benefit the victims of the Hillsborough disaster, in which 95 people from Liverpool were killed. It has some different artists collaborating, as these sorts of things usually do, but their number is small and the performance is largely McCartney's in my opinion, so I've included it. That was a number one hit in Britain. The other A-side here is a live version of the folk song "All My Trials." It barely made the top 40 in Britain. Strangely enough, Nick Drake also did a cover of that song.

There are three unreleased songs as well. One, "In Liverpool," is a very nice original, acoustic McCartney song that has only appeared on his "Liverpool Oratorio" DVD, for some reason. The other "New Moon Over Jamaica," is a demo of a song written by McCartney, Johnny Cash, and Tom T. Hall. Both Cash and McCartney liked to vacation in Jamaica a lot. A McCartney and Cash duet of the song appeared on a 1988 Cash album, but the demo only features McCartney. The third one is a cover of the Ray Charles classic "Hit the Road Jack," done at a soundcheck in 1990.

I've included "Rave On" as a bonus track. McCartney is a huge Buddy Holly fan. It would seem a natural for him to record this Holly classic at some point, but as far as I know there are only a few rough live versions of him doing it. I'm only making it a bonus track because the sound quality don't match up to the rest of the album.

For the album cover, I've used the cover art for the "My Brave Face" single. The song "Flying to My Home" was a B-side to that song. The original cover just said "McCartney" in big letters. I've added the "Flying to My Home" title in the same font. Plus, I squeezed in "Paul" to the side.
Posted by Paul at 4:13 PM