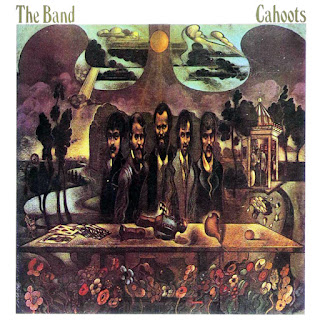 The first two albums by the Band - "Music from Big Pink" and "The Band" - are considered all-time classics. Their third album, "Stagefright," is pretty good. But their fourth album, "Cahoots," is widely seen as a disappointment, and I agree. It has a few excellent songs, but some clunkers too. This is my effort to "fix" "Cahoots" by replacing those clunkers with some stray tracks from that same year.

Here are the four songs I've removed: "Where Do We Go from Here," "Shoot Out in Chinatown," "The Moon Struck One," and "Thinkin' Out Loud." They're just okay and forgettable, and not up to the high standards the Band set with their first three albums. I also rejected some stray tracks from the time period. For instance, "Move Me," an "original" written by Rick Danko, in fact is so very similar to the 1970 King Floyd hit "Groove Me" that the Band surely would have lost a lawsuit if they'd tried to release it at the time. Even the title is hardly changed!

To replace these songs, the most obvious contender is "Endless Highway." This is a great original song that was played a lot in concert by the Band in the 1970s, but no studio version of it was released at the time. It turns out a studio version was recorded in 1971, but apparently just after "Cahoots" was released.

I've also added three fun cover versions. The Motown hit "Baby Don't You Do It (Don't Do It)" was recorded in the studio, and was a concert staple for the Band, but the studio version wasn't released at the time either. "(I Don't Want to) Hang Up My Rock and Roll Shoes" and "Loving You Is Sweeter than Ever" are songs the Band also played in concert, and both were released on the "Rock of Ages" live album that was recorded in 1971 and released in 1972. I've found unreleased performances of both songs that came from the same series of concerts that were recorded for the "Rock of Ages" album. Both are fantastic soundboard recordings that no doubt were considered for the live album. I've managed the remove the audience noise so well that they sound just like studio versions.

I've sprinkled the replacement songs throughout the album, because "The River Hymn" is still a natural album closer.

I've also included another cover song, "Slippin' and Slidin'" as a bonus track. It's a live version that was released on the "A Musical History" box set. The reason it's only a bonus track is because it dates from 1970, not 1971. It arguably belongs with the "Stagefright" album.

With four songs removed and another four songs added, the album ends up being about the same length, at 45 minutes long. In my opinion,  it's a much stronger album after these changes, one that might even compare to their great first two. I suppose the group wanted all original songs, but chief songwriter Robbie Robertson was losing his inspiration around this time, as could be seen by the fact that it would be four more years before they put out another album of originals. They would have done much better to include more cover versions.

The album cover is simply the unchanged original cover.
Posted by Paul at 1:14 PM

Email ThisBlogThis!Share to TwitterShare to FacebookShare to Pinterest
Labels: 1971, Band