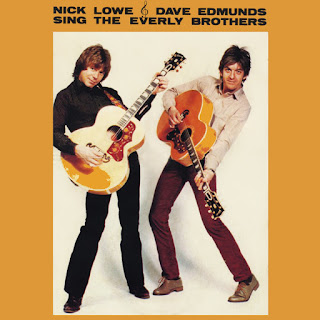 This is a fun little thing. In August 1979, Nick Lowe and Dave Edmunds of Rockpile played an session for the BBC with just the two of them and their acoustic guitars. They must have been in a big Everly Brothers mood, because they played five Everly Brothers songs in a row, then two of their own songs, then two other old cover songs. They jokingly called themselves the "Beverly Brothers."

A year later, Rockpile finally released a studio album (Seconds of Pleasure) after backing each other's solo albums for a few years, and they included four of the Everly Brothers covers from this session as a bonus EP. But the other songs were never released, except on a bootleg that didn't include the released songs. Here are all of the songs, together and in the order they were performed. They're short songs, so it's only a 22 minute album, but it's a fun one.

The cover art is based on the EP cover, but I made some changes. (The original specifically mentioned four song titles, but that doesn't work anymore when there's nine songs.)
Posted by Paul at 9:32 PM