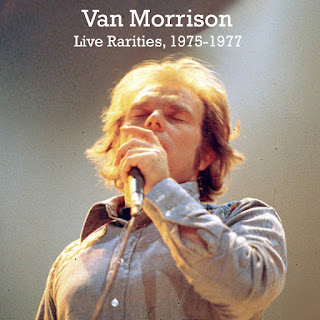 So far, I've posted four collections of Van Morrison's live rarities. I've included interesting songs that aren't on any of the other many Morrison live albums I've posted here. This is the fifth and final album in that series. The reason it's the last is because I still really like Morrison's music in 1978 and 1979, but he played few to no rarities he hadn't played before, as far as I know. Then my interest in his music plummets after 1980, when he switched musical styles to some degree.

Unfortunately, the sound quality for these songs is merely okay. I believe they all come from audience bootlegs, except for the last song, which is from a TV show. The reason for this is because Morrison played less than 10 concerts in 1975, and then made only a smattering of special appearances in 1976 and 1977 (such as appearing in the Band's "Last Waltz" concert in 1976). But he played a really interesting bunch of songs in 1975, including some he never did before or again. That's why I'm willing to put up with the less than stellar sound.

The last song is a version of Morrison singing his classic song "Moondance." Boring, you'd think, right? He's done that a million times. But what makes this interesting are the guests he has on the song. It's a seven-minute-long version, and Morrison only singing a bit at the start and the end. Instead, it's a showcase for all those guests: Carlos Santana, George Benson, Dr John, Tom Scott & Etta James. Each of them take an instrumental solo, except for Etta James, who does some vocal scatting for her turn.

The other songs are all covers, and really unusual ones at that, except for one other. That's "T. B. Sheets," a song he recorded in 1967 and almost never played in the years since. According to setlist.fm, he's only played the song six times since 1968, and four of them were in 1975.

Even though the sound quality of these songs is not stellar, it has to be good enough for me to want to listen, or I wouldn't bother posting them. The one borderline case is with "Walking to Dog," so I've only included that as a bonus track.

The album cover is from the 1977 TV appearance where Morrison sang and played "Moondance" with all those guests.
Posted by Paul at 4:11 PM