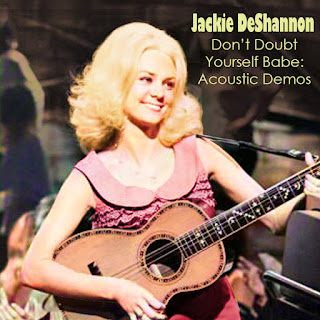 I'm very pleased to be able to offer this album. All but one song is officially unreleased, and very very rare, even as a bootleg. All the songs feature Jackie DeShannon singing and playing in a solo acoustic format.

DeShannon is known for her 1960s pop hits like "What the World Needs Now" and "Put a Little Love in Your Heart." She definitely isn't known for playing in a solo acoustic style, since none of her single or album tracks are performed that way. Yet a few weeks ago I posted an unreleased concert of hers in that format from 1963, and now I have these demo recordings from 1965. DeShannon is a much better songwriter than most people realize, writing hits for others like "Needles and Pins," "When You Walk in the Room," and "Betty Davis Eyes." (She claims she cowrote "Needle and Pins," but she didn't get official credit for it.) I'm not entirely sure, but I believe all the songs here are written by her.

DeShannon was a musical chameleon of sorts, able to sing and even write songs in a wide variety of styles. But that turned out to be one of the biggest problems of her career, because her record companies usually didn't know how to take advantage of her skills. One of the worst aspects was that they consistently undervalued her songwriting, which is why some of the songs she wrote ended up as hits for others, and some of her own hits were written by others.

This album is a case in point. DeShannon wrote an excellent bunch of folky songs right at a time when folk-rock was a booming genre. (In fact, she'd practically invented the genre with her songs "Needles and Pins" and "When You Walk in the Room" back in 1963.) You would think the logical thing to do was release these songs as an album with a folk rock backing.

But, for whatever reason, that didn't happen, and most of these went unreleased in any form. One song here, "Don't Doubt Yourself Babe," was covered by the Byrds for their classic album "Mr. Tambourine Man." Another, "Splendor in the Grass," was done in a folk-rock style, in which she actually was backed by all five of the original Byrds! But it was only released in 1966 as a B-side to a little-noticed single.

It's a hint at what might have been. How awesome would it have been had the Byrds backed her for an entire album? Had that happened, the arc of the rest of her career may have gone very differently, in which her songwriting talents would have been properly respected and emphasized. Remember that this was a time, pre-Joni Mitchell, when female singer songwriters were almost unheard of, and there was a huge bias against any women who tried to do more than just sing. As it was, most of her albums were dominated by cover versions, since her record companies wanted to choose the songs for her.

These demos apparently were recorded on May 27, 1965, though I'm not sure if that date is accurate. That could also be the date the record company received or processed them (and then ignored them). Undoubtedly, many of the songs were written before that, since the Byrds' version of "Don't Doubt Yourself Babe" had already been publicly released by then. The first 12 songs here later became a bootleg called "Girl of Yesterday." But it was extremely rare. It was sold by a DeShannon fan club, but that club went defunct about a decade ago. I'd had this on my "want list" for years, and I looked all over for it without any success. I finally found it on SoulSeek today, so I'm posting it here straight away.

The two last songs are bonus tracks of sorts that I've added. I don't know where or when "I Don't Wanna Be without You" is from. I found it on YouTube. But it clearly has the same sound, so it almost certainly is from 1964 or 1965. I also don't know the details of where "Only You Can Free My Mind" is from. It's officially released, but only a various artists album of songs written by DeShannon, with that one the only one actually performed by her. In addition to acoustic guitar, it also does have some light drumming.

Including the two songs I added to the end, this makes a 39-minute-long album. It amazes me this hasn't been officially released, especially since the sound quality is very good.

I'm not sure when or where the cover art photo of DeShannon is from. But it certainly looks like it dates from around 1965. Probably, it was from a TV appearance. The photo was black and white, so I added a colorized it.
Posted by Paul at 8:11 PM