Badfinger - In Concert at the Hippodrome (1973) 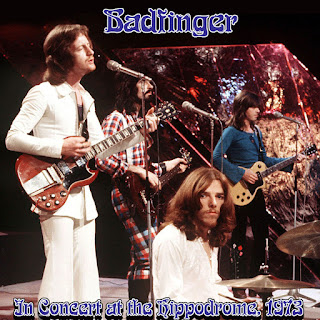 This is essentially a continuation of my last post (Badfinger's "In Concert at the Paris Theatre"). As I said in that, there's only one good official live Badfinger album, called "BBC In Concert." But it's taken from two concerts, and I think it works better as two albums. So here's the second part, taken from a concert professionally recorded by the BBC at the Hippodrome in London in 1973.

But it's not that simple. The actual Hippodrome part is only 29 minutes long, which is rather short for an album. I wanted to use this (and the other live Badfinger album I just posted) to gather all the remaining live Badfinger in excellent sound quality that I didn't post already or are repeats of songs. So I've fleshed this out with four songs recorded for a short-lived British TV show called "Set of Six," plus another song played on the TV show "The Midnight Special" in 1973.

I haven't changed the songs at all, but I've edited the crowd noise after the extra songs to make it sound like they all came from the same concert. Some of those extra songs had no audience noise at all, or only a few seconds before the recording came to a sudden halt. So I reused crowd noise from other songs, but edited them to remove specific noises making it obvious that it was a repeat.

The end result is an album that's 46 minutes long. One benefit of splitting the BBC album in two is that it's okay to have some repeats between this album and the Paris Theatre one I just posted.

Unfortunately, I don't know of any good live Badfinger recordings after 1973, until the band fell apart in 1975.  There is a popular bootleg recorded in Cambridge, Massachusetts, in 1974. But the audio quality was too poor to interest me, even as bonus tracks.

By the way, the recording of "Day After Day" was missing about the first 30 seconds. So I found a different version of that song and patched that in. You can probably hear the transition if you listen for it, but I figured it was better to do it that way than just having the start of the song missing.

I made the cover art using a photo of the band playing on the British TV show "Top of the Pops" in 1973. (I assume the recording of that performance is either lost or was a lip-sync to a record.)
Posted by Paul at 7:41 PM