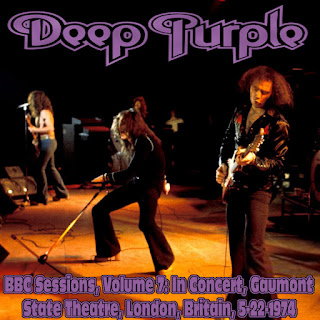 A while back, I posted six volumes of Deep Purple playing for the BBC. The different personnel changes of the band are commonly known as Mark I, Mark II, and so on. All of those volumes features the Mark I or Mark II versions. I mentioned that the Mark III version of the band also had a concert broadcast by the BBC in 1974. Several people asked me to post it. I was reluctant because I'm mainly a fan of the Mark I and II versions, plus this concert has been officially released in full. But I'm trying to be more thorough posting BBC material from the 1960s and 1970s especially, so here we are.

The Mark II version of the band is the most celebrated one, especially due to the classic 1972 album "Machine Head," and the song "Smoke on the Water." Two band members left in 1973. Since of them included the lead singer, Ian Gillan, the sound of the band changed significantly. He was replaced by two lead vocalists, Glenn Hughes and David Coverdale, which was the start of the Mark III phase. They released the album "Burn" in 1974, which was both a critical and commercial success.

This concert took place just a few months after the release of "Burn," so it naturally features a good number of songs from that album, plus older favorites. As mentioned above, the concert has been officially released, through the album "Live in London."

The band almost always played an encore. In this time period, it usually was a cover of the song "Going Down," with the band's own "Highway Star" sometimes added. But apparently something happened backstage, though it wasn't clear what, and there was no encore this night. It wasn't really necessary, but I wanted to hear this concert with the encore that should have been. So I went looking for any recordings of those two songs from around that time period. I had to go all the way to early 1975 and the official album "Live in Paris" to find them. So those are the last two songs here. If you're a purist, especially if you already have the "Live in Paris," then just disregard those.

I didn't find a photo in concert featuring everyone in the band. So for the cover, I used one showing the two lead singers, Glenn Hughes and David Coverdale, and lead guitarist Ritchie Blackmore. All I know about it is that it dates to the year 1974.